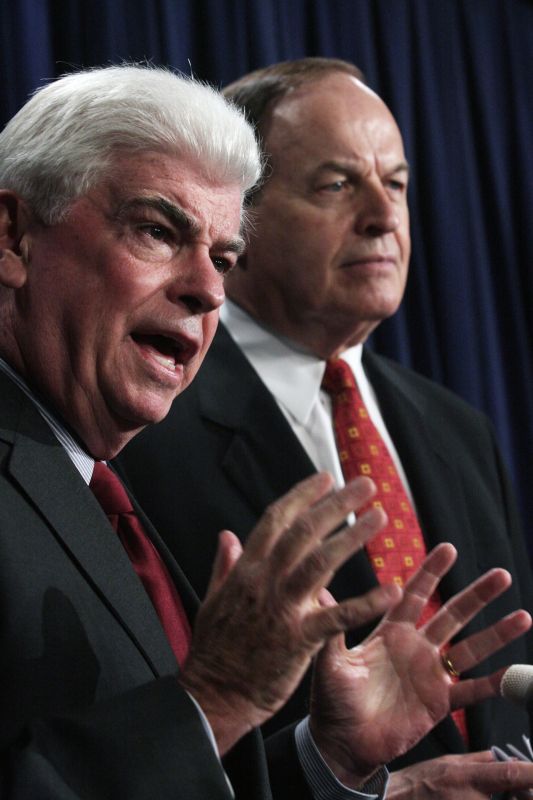 The fate of Congress’ massive financial reform overhaul now rests in the hands of a few select lawmakers—top Democrats and Republicans from the House and Senate. Starting Thursday, this small group has two weeks or so to merge 3,000 pages of dense, overlapping legislative text into a single bill to deliver to President Obama.

These same lawmakers also happen to be among the most well-connected to Wall Street, big banks, and their lobbyists in Washington—that is, the very industries they’re seeking to regulate. A review by Mother Jones of lobbying records shows there are 70 current or former financial lobbyists who’ve previously worked in the Capitol Hill offices of these lawmakers. The lawmakers participating in the conference process with the most Hill staffers-turned-finance-lobbyists include Sen. Chris Dodd (D-Conn.), the banking committee chairman; Sen. Richard Shelby (R-Ala.), banking committee’s ranking member; and Sen. Charles Schumer (D-NY), a longtime ally of Wall Street.

The close ties between the financial reform conferees and finance lobbyists are a stark reminder of how much clout Wall Street has here in Washington, and how ingrained the big banks are in the legislative process. A recent report (pdf) by the Public Accountability Initiative, titled “Big Bank Takeover,” put it this way: “The big banks have employed an unrivaled network of in-house lobbying teams, hired guns, industry associations, front groups, and behind-the-scenes influence peddlers with deep connections to Congress and the Obama administration, including the leadership of the House financial services committee, the Senate banking committee, the Treasury Department, and key regulatory agencies.”

31 House members (10 of those will only participate on select parts of the bill) and 12 Senators will be participating in the financial reform conference debates, led by the House and Senate’s respective stewards of financial reform in 2009 and 2010: Rep. Barney Frank (D-Mass.), chairman of the financial services committee, and Sen. Chris Dodd (D-Conn.), chairman of the banking committee.

Here’s a list of the House and Senate conferees and the number of former staffers they have who once lobbied or continue to lobby for the finance, insurance, and real estate, or FIRE, sector. All data comes from the Center for Responsive Politics’ revolving door database.

On the House side, there are 26 former staffers with FIRE ties: