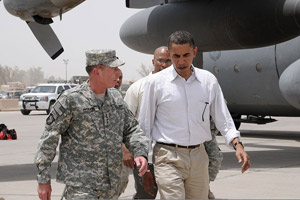 Much of the time, our wars may hardly exist for us, but in the age of celebrity, our generals do—exactly because they become celebrities. When Barack Obama picked Stanley McChrystal as his Afghan war commander, the general was greeted by the media as little short of a savior. He was, we were told, superhumanly fit, utterly austere (eating only one meal a day), and—strangely for the man who was to oversee a protect-the-people counterinsurgency war—had spent his professional life in the deepest shadows of counter-terror warfare at the head of groups of hunter-killer special operations forces. His was the darkest of legacies, but he was greeted like Superman.

Reading the Michael Hastings Rolling Stone piece that unseated him, you can sense in the contempt that McChrystal and his aides (many former special ops officers) express for the Obama administration and its civilian representatives in Afghanistan just what a blunt instrument the man was. No leader or group speaking that way, or that crudely, in private could help but exude similar feelings in public. McChrystal was, in fact, always a divided man, caught between his counter-terror past—he significantly increased special operations units in Afghanistan and sent them out to hunt Taliban mid-level leaders (and in the process kill civilians)—and his newer fealty to counterinsurgency which led him to institute rules of “courageous restraint” that left American ground troops grumbling.

While the president officially picked McChrystal back in 2009, he was, in reality, the choice of Bush’s favorite general, Centcom commander and now new Afghan war commander, General David Petraeus. So the present White House line—”This is a change in personnel but it is not a change in policy”—couldn’t be more accurate. There have already been several moments in the Obama presidency when a daring president might have changed the course of the war and begun winding it down. In March 2009, when he first “surged” in Afghanistan, again at West Point that December, and now with the Petraeus appointment, Obama has instead chosen the route slated to give him the least trouble domestically, and so doubled down on the war. The first two missed moments have already led, via chaos and failure in Afghanistan, to the third, in which the president dethroned a military demi-god for a man genuinely worshipped in Washington.

David Petraeus is not a blunt instrument. He’s the most politically savvy military man of his generation. It says something about our moment in American war-making, however, that the main claim to fame of the four-star general who is treated like the Ulysses S. Grant of the twenty-first century has nothing to do with victory. He simply had a hand in holding off an ignominious American defeat in Iraq or, as the New York Times recently put it, “helping to pull Iraq back from the edge.” And not even all that far back.

With Petraeus, Obama again took the easier road in the immediate moment. What will he do, though, in 2011 as the presidential election campaign gears up, if his chosen general, beloved of the right, asks for more troops? The quagmire of this war is in Washington, not Afghanistan, bad as the facts on the ground may be there. With the Petraeus appointment, whether he knows it or not, the president is already up to his waist in the Big Muddy.