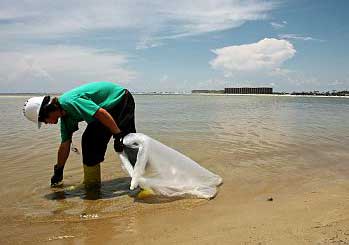 Sigh. This special report from Feet in 2 Worlds just in:

Federal immigration officials have been visiting command centers on the Gulf Coast to check the immigration status of response workers hired by BP and its contractors to clean up the immense oil spill.

Immigration and Customs Enforcement (ICE) in Louisiana confirmed that its agents had visited two large command centers—which are staging areas for the response efforts and are sealed off to the public—to verify that the workers there were legal residents.

“We visited just to ensure that people who are legally here can compete for those jobs—those people who are having so many problems,” said Temple H. Black, a spokesman for ICE in Louisiana.

Granted, undocumented work is illegal and all, and Black is just echoing a popular sentiment in Southern Louisiana, where some people harbor resentment toward the Hispanic laborers who stayed after they’d come to help clean up after Katrina, and some people put up signs like this: 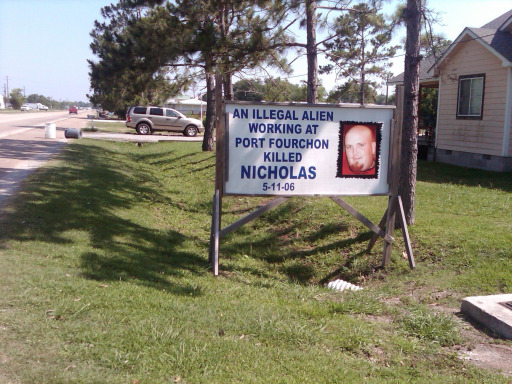 But it seems like it might be time to prioritize. As do many crisis-management operations, the Deepwater Horizon response has its share of miscommunication, chain-of-command confusion, counterproductive bureaucracy, and general clusterfuckery. Federal agents rounding everybody up and checking IDs isn’t going to help things.

And that’s not the only distraction from keeping eyes on the cleanup prize. As I’ve reported, there are only 60 workers cleaning up Elmer’s Island, Louisiana, a wildlife refuge inundated by crude, and many are already disgruntled about being mistreated or not getting paid. Then, last week, they were required to undergo drug testing. According to workers based on the island, out of the first 50 employees tested, 46 failed and 2 refused, resulting in 48 firings in one day. (BP hasn’t said anything about the tests.) Elmer the BP mole, who is in a position to know this but I can’t tell you what that position is because he’d get fired, says that these guys are definitely not junkies and crackheads. If they’re testing positive for drugs, he says, it’s likely for pot.

Cleaning up the largest oil spill in the nation’s history sort of seems more pressing than whether the people who get paid $10 an hour to rake toxic oil-sludge sand into piles, under Southern sun so grueling that shifts are 20 minutes on and 40 minutes off, have recently smoked weed. It also seems like a possible reason to not send in ICE agents to do a job that goes way beyond their normal (arguably more important) duties. As ICE spokesman Temple H. Black told Feet in 2 Worlds, “We don’t normally go and check people’s papers—we’re mostly focused on transnational gangs, predators, drugs. This was a special circumstance because of the oil spill.”

That sentence wins today’s prize for Spokesperson Statement That’s Supposed to Be More Comforting Than Alarming But Is Actually the Opposite. (First runner-up is Black’s assertion that any undocumented workers “would have been detained on the spot and taken to Orleans Parish Prison”— whose conditions the Justice Department has called unconstitutional and which has a history of losing track of or not providing lawyers to thousands of indigent prisoners in its care.)

“It’s like, ’round everybody up and leave the oil on the beach,'” Darlene Kattan, director of the Hispanic Chamber of Commerce of Louisiana, told the authors of the special report on the ICE raids. “In a catastrophic situation like this, I think we should be more well-reasoned.”