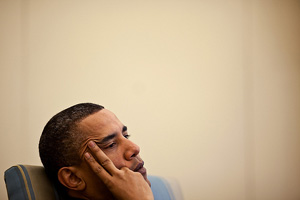 The president’s job description is short—run the government and lead the nation, all pursuant to protecting the Constitution and the country. The first part is relatively easy to describe: Command the military, propose budgets, sign or veto laws, conduct diplomatic relations, staff and oversee the executive branch. The other portion—leading—is more subjective. And during the eight weeks since BP’s Deepwater Horizon rig exploded and an oil gusher was created on the ocean floor, there’s been a rush of commentary questioning President Barack Obama’s leadership. Much of it has been off the mark, but it was filling a commander-in-chief vacuum created by Obama himself.

For a long stretch, White House reporters repeatedly queried press secretary Robert Gibbs as to whether Obama was exhibiting a sufficient amount of anger. New York Times columnist Maureen Dowd captured this line of attack by deriding Obama as “President Spock.” She opined,

Too often it feels as though Barry is watching from a balcony, reluctant to enter the fray until the clamor of the crowd forces him to come down. The pattern is perverse. The man whose presidency is rooted in his ability to inspire withholds that inspiration when it is most needed.

As this meme reached a crescendo, Obama, in an interview with Matt Lauer, declared that he was looking to kick someone’s “ass.” Was that angry enough? Perhaps.

The media circus quickly moved on to another narrative: Obama hadn’t spoken to BP CEO Tony Hayward. At a series of briefings, reporters pressed Gibbs on this, and Gibbs inelegantly referred to the oil firm’s “corporate governance structure” to explain why Obama hadn’t yet contacted Hayward to dress him down. After a few days of fending off these queries, the White House announced that Obama had summoned BP chairman Carl-Henric Svanberg and other BP officials to a meeting.

So now Obama has used tough street talk and called in BPers for what will no doubt be something of a tongue-lashing. Will that be enough to quell the griping?

Probably not. Because the real problem has not been Obama’s too-calm public demeanor (though more outrage would not have hurt the so-called “optics” of this situation) or his decision not to scream at Hayward directly. It’s been the White House’s inability to demonstrate that Obama is fully in control of the US response to the eco-nightmare in the Gulf of Mexico.

From the start, Obama ought to have been barking orders and imposing demands on BP and the federal agencies—and doing this in public view. Not micromanaging, but commanding. During a massive catastrophe, citizens expect to see someone in complete charge. While Obama obviously was overseeing the federal reaction, his engagement was not always on public display. For weeks, the White House kept pointing to only one example of White House pressure on the response effort—forcing BP to drill two relief wells, not merely the one the oil company planned to pursue. (These relief wells will be used to plug the leak once they are completed, perhaps as early as August.) In recent days, Obama has stepped up his command presence, calling on BP to improve its claim process and to provide payments to oil rig employees out of work due to the drilling moratorium imposed in reaction to the Gulf spill. At the same time, Coast Guard Rear Admiral Thad Allen has improved as the public face of the Obama administration’s spill efforts, providing briefings in crisp military-speak, as if he is prosecuting a war, and demanding more and better action from BP.

Yet for most of the past two months, there have not been many headline-grabbing instances of Obama zapping an order to BP or federal agencies and proclaiming, “Make it so.” Nor were there a string of lengthy New York Times or Washington Post behind-the-scenes stories sourced to anonymous administration officials detailing how Obama had been relentlessly demanding one specific action after another. If such activity were regularly happening in the Oval Office, the White House was not getting the word out. During his one press conference regarding the spill, Obama explained more than he led. And on his initial trips to the Gulf, Obama seemed to be listening more than telling—which does have its benefits. But pointing out tar balls on a beach is different than cracking a whip. It isn’t very Churchillian.

Obama and his White House aides seem to realize they have created the impression—if not the reality—of a command gap. (Several Republican critics have noted that Obama has not had a dramatic “bullhorn moment”—a reference to when George W. Bush, after 9/11, visited ground zero in New York City and vowed to weary rescue workers, “The world hears you, and the people who knocked these buildings down will hear all of us soon.”) Consequently, on Monday, the president began a two-day visit to the Gulf, which will lead to his first Oval Office address to the nation on Tuesday night. On Wednesday, Obama will hold that meeting with BP execs. This is a full-scale blitz. In his speech, Obama will outline what’s ahead in the attempted containment process. He’ll also discuss overhauling the regulatory process governing offshore drilling, beefing up the BP claims process, restoration plans for the Gulf, and the need for an energy bill that addresses both oil dependence and climate change.

On Meet the Press on Sunday, top Obama adviser David Axelrod said, “We’re at a kind of inflection point in this saga.” That seemed to be a not-too-subtle way of saying, we’re aiming for a reset. Obama, he added, “wants to lay out the steps that we’re going to take from here to get through this crisis.” But Obama ought to do more than lay out plans. He should make it obvious that he’s on top of this task. That could be accomplished just by clearly and forcibly stating tasks and goals he’s established for Allen, the federal government, and BP. MSNBC’s “First Read” newsletter notes, “If Team Obama can’t convince the public that it has command and control after these next three days, then it probably never will.”

That may be too dire a quasi-prediction. But White House strategists do appear to have devised a crash course to ensure that Obama is seen as a commanding figure in this far-from-over crisis. Politicians, including Obama, are fond of telling voters that they are fighting for them. But it’s better for a pol to show voters that he or she is doing so. Exhibiting rage, chewing out BP execs, inspecting damage on beaches—all of that is fine. But none of that is a substitute for the hard work of issuing strong and effective orders. And Americans (and even pundits) are entitled to evidence that the president is engaged in this manner. If it were obvious that Obama is in full command, his anger—or Spock-like lack thereof—would not be worth a single newspaper column.