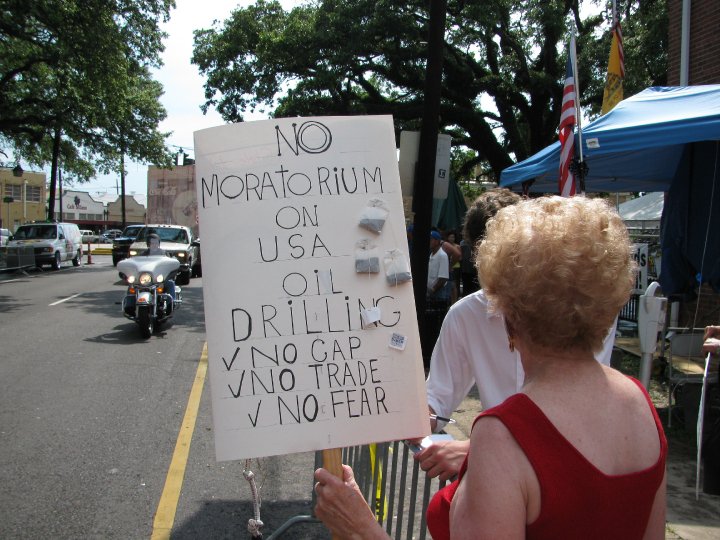 When my colleague Stephanie Mencimer notified me that some Tea Party types would be holding a rally in Houma, Louisiana, on Saturday to protest the new federal moratorium on deepwater oil drilling, I had some concerns. Namely that Tea Partiers getting involved in the issue could make it look like only crazy people are against the drilling ban down here, when in fact plenty of non-crazy people are mad that it could endanger as many as 20,000 jobs.

But the sentiments expressed at this particular rally were, as it turns out, about 300 percent crazier even than I had feared. Though a heavy storm was dumping sheets of rain outside, a couple hundred people packed the City Club of Houma.

Things started sensibly enough. We bowed our heads and prayed that God would lift the drilling ban; the president of Terrebonne Parish (below) declared that Obama’s deepwater drilling moratorium was an “economic disaster of biblical proportions.” Senator David Vitter’s state director, David Doss, read a statement from the Louisiana Republican, who said he was unable to attend due to a canceled flight but “looks forward to working with you all and we must push forward to end this devastating moratorium on drilling.”

But other than that, the rally was mostly two hours of yelling about how climate change is natural—”I’ve never seen CO2 in the air, have you ever seen CO2 in the air??”—how Barack Obama is simultaneously trying to enslave the American population and steal from it, and how welfare recipients should have to be regularly drug tested. One speaker gave the usual “We don’t need the government” speech, followed immediately by, “If the government was doing its job making sure MMS did its job, we wouldn’t be here. Why wasn’t the government looking down their throats?” Another speaker pointed out that we’re at two wars, one in Iran and one in Afghanistan, and that if we’re not careful, the president of Israel, Ahmadinejad, is going to gain enough power to take over the world.

“Whose agenda is Obama pushing?” one speaker asked, and everyone yelled, “George Soros’!” Then we watched a video montage including footage of American soldiers, stills of Obama in Dark Knight Joker makeup, and the sun rising and setting on the Gulf of Mexico, set to Queen’s “The Show Must Go On.” Then we watched another video with clips of Rahm Emanuel and ACORN employees intercut with pictures of Chairman Mao, all over the superdramatic theme music from Requiem for a Dream.

Then it stopped raining, and everyone went outside to show off their crazy signs.

This guy told me the dying pelicans are the fault of Obama (Whose Government Is Too Big and Should Leave Corporations Alone) because the government didn’t do enough to save the birds covered in BP’s crude. He said the design was saved at the mall shop where he had it made, so anyone can buy one.

Afterwards, I left to check out how the cleanup efforts were going in the gorgeous marshes at nearby Pointe Aux Chenes. At the marina, four contractors stopped me to let me know that it didn’t matter whether I was media or the Queen of Sheba; I was not allowed on to that piece of public property unless I was with BP.