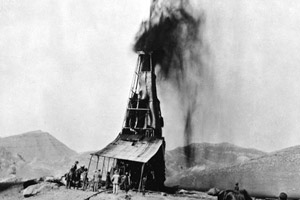 Can it rain oil? A video shot after a recent storm in River Ridge, Louisiana, which has been making the rounds online in recent days, purports to show exactly that. “You can see that this is oil,” the narrator says, sweeping a camera over puddles and patches of road bearing a telltale rainbow sheen. “Isn’t that crazy dude… It’s oil everywhere. And it’s thick over there, like we’re seeing in the Gulf.” The video should be viewed with a healthy dose of skepticism. But it does raise an interesting question. Is such a thing even possible?

For the most part, oil itself doesn’t actually evaporate, though some of the chemical elements in crude oil can. (The sticky tar balls washing ashore are the remnants.) That hasn’t stopped some from hypothesizing that, given the dispersants BP has been applying in unprecedented quantities in the Gulf and the lack of information about how they work, it’s possible that dispersant-altered oil may indeed be entering the atmosphere. The EPA says this isn’t the case. “EPA has no data, information or scientific basis that suggests that oil mixed with dispersant could possibly evaporate from the Gulf into the water cycle,” the agency said in a statement. (But then again, the EPA also has very little science on the environmental or health effects of dispersants, as it has admitted previously.)

The notion of oily rain is a myth. Oil as a whole does not evaporate—it is not possible that it would be in the clouds or coming down in the form of rain. Oil is made up of component parts, some of which are volatile and do evaporate into the atmosphere, but these separate and diffuse out into the air. Other component parts do not evaporate and are left behind as weathered oil, residue or tar balls.

There’s a bigger concern than oil visibly raining from the sky; it’s the toxins you can’t see. Gases in oil that can evaporate are known as volatile organic compounds, or VOCs. A 2003 National Academy of Sciences (NAS) report notes that light crude can lose up to 75 percent of its initial volume due to evaporation of VOCs after a spill. That study also notes, troublingly, that “despite the importance of the process, relatively little work has been conducted on the basic physics and chemistry of oil spill evaporation.”

The most problematic VOCs in oil are hydrogen sulfide, benzene, and naphthalene, writes NRDC senior scientist Gina Solomon, though she lists a number of other troublesome compounds in oil as well. Hydrogen sulfide smells like rotten eggs and can cause headaches, confusion, and respiratory problems. Benzene and naphthalene are known carcinogens. The bigger concern than rain is that these VOCs are being carried ashore by wind currents. The EPA is monitoring the VOCs in the air, and Solomon says that her study of that data finds “some levels that could raise health concerns.” Exposure to the crude oil itself, either on land or in the water, is also not particularly good for humans. There’s also concern that storms in the Gulf could sweep up the oil and push more onto land, and hurricane season is already upon us.

We also know that one of the dispersants that has been used in the Gulf carries its own health concerns. Corexit EC9527A contains 2-butoxyethanol, which can cause headaches, vomiting, reproductive problems, and “liver and kidney effects and/or damage.” More than 300 cleanup workers have already reported feeling ill, describing symptoms ranging from vomiting and stomach pain to headaches and chest pain.

Point is, there are plenty of serious health concerns posed by the spill and the widespread use of dispersants that have nothing to do with oily rain.

So what to make of the video? I’d guess we’re probably seeing the sheen of runoff from roads, parking lots, etc. (Let’s not forget that the cars we drive every day are burning and sometimes leaking a refined version of what is currently spewing into the Gulf.)