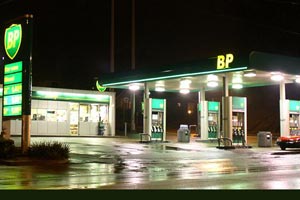 A few weeks ago, I borrowed a car to run some errands. I prefer to travel on two wheels, and I have the luxury of doing so because I live in a city. But let’s be honest, carrying a bed frame on a bike can be pretty tough. As I returned to DC, I realized I needed to fill up the gas tank, but was dismayed at the stations lying before me: BP, BP, BP…and then I spotted an Exxon station. Up until about April 19, I probably would have chosen BP over Exxon, the legacy of the Valdez spill still at the forefront of my mind even 20 years later. But ever since the Gulf disaster, I just couldn’t stomach spending my money at BP.

I know it’s not an entirely rational thought process. After all, fuel from other gas stations that don’t bear the BP logo may well be coming from BP wholesalers and refineries, meaning I could be buying BP oil at another station without realizing it. And most of the BP-branded stations are owned by independent franchisees, since the company doesn’t actually own many of the 13,000 retail stations bearing its logo these days (BP announced in 2007 that it plans to sell off the 700 it still owned). That means I’m most likely hurting a small-time business person rather than the oil giant most likely. And it’s not like my decision to deny BP a relatively tiny sum of money puts a noticeable dent in its deep pockets anyway. More importantly, it’s not like there’s any oil company out there that doesn’t have something deplorable on its record. I’m not alone, though. There’s good reason a significant “Boycott BP” movement has sprouted in the past eight weeks. The movement’s Facebook page touts 557,000 fans (heck, even the band Korn is taking part).

Gavan Fitzsimons, a professor of marketing and psychology at Duke University’s Fuqua School of Business, understands the feeling. He, too, has cruised by BP stations in the weeks since the spill. I caught up with him to talk about the effect of boycotting BP and what concerned citizens should think about this whole question.

“Even if everybody decided to boycott, it’s probably not going to have a big impact on BP,” says Fitzsimons. The real impact, he said, is down the line. What matters is whether, in 20 years, people still get the heebie-jeebies when they think about BP. “In the long run, it will be this sort of permanent taint that will be associated with the corporation.”

But when it comes to permanent taint, there aren’t many oil companies out there that don’t have major problems in their record. No that long ago, Exxon dumped 10.8 million gallons of oil into Alaska’s Prince William Sound. Chevron (or at least its subsidiary, Texaco) has been accused of dumping 18 billion gallons of toxic wastewater into the Ecuadorian Amazon over three decades and has been fighting a $27 billion fine in court. Shell has been dumping oil all over Nigeria for years. You could shop at Citgo, but that depends on how you feel about Venezuela and its president, Hugo Chavez, who own the entire company.

For this reason, a number of environmental groups have held back from endorsing a BP boycott. “I could think of really good reasons not to patronize any of them,” says Kert Davies, research director for Greenpeace. “They’re all scum. There’s no clean oil company.”

Public Citizen, one of the groups promoting a boycott of BP, is calling for people to avoid BP projects for three months. Tyson Slocum, director of the group’s energy program, says that it’s not about making BP feel the pinch immediately. “Boycott success is not going to be measured in BP taking a hit on its monthly sales number,” he said. “It’s going to be ongoing after the brand that is BP.” BP’s brand, of course, is big for them. The company has spent hundreds of millions of dollars over the past decade to convince us that it’s the greenest of all oil companies with the “Beyond Petroleum” campaign.

I asked Slocum, though, what people are supposed to do, since many other oil companies have their own environmental and human rights issues. “The best option is for individual consumers to reassess their own consumption habits and figure out how can I use less, not how can I buy oil from a more moral oil company,” said Slocum. This includes the obvious suggestions of biking or walking more, taking public transportation, carpooling, telecommuting where possible, or buying a more fuel-efficient vehicle, if you have the means.

If you just can’t stomach giving BP your hard-earned cash, Public Citizen also put together a list of other BP products to avoid, should you choose to boycott. Those include Arco (another brand of gasoline), Castrol (which sells motor oils and lubricants), Aral (another brand of motor oil and lubricants) and AMPM (a chain of convenience stores). The company even owns Wild Bean Café, a chain of coffee shops.

Duke’s Fitzsimons says that even if boycotting BP doesn’t necessarily solve the bigger problem, it at least gives consumers some peace of mind about not supporting a company that they find reprehensible. “The psychological pleasure of ‘punishing’ BP will be satisfying in the short term,” he says.

The real change, though, happens when consumers talk to others about why they’re rejecting BP and spread the sentiment more widely, and when people shape their decisions about this in the long-term. “Boycotts have a stickiness that will hang in there for a long, long time,” says Fitzsimons.