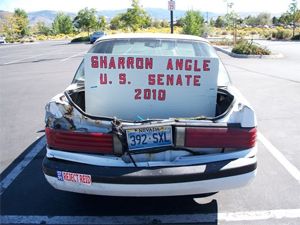 Courtesy of top-notch blogger Joe. My. God., here’s a mashup of campaign-trail statements by Sharron Angle, the Tea Party-approved GOP candidate who’s challenging Senate majority leader Harry Reid for his Nevada seat, in which she dismisses America’s 6.8 million long-term unemployed citizens as having been “spoiled” by government “entitlement” and repeatedly insists: “As your US Senator, I’m not in the business of creating jobs.” (She is, however, apparently in the business of giving herself promotions in mid-statement.)

“You can make more money on unemployment than you can going down and getting one of those jobs that is an honest job,” she starts, and the facepalm-worthy statements kind of flow from there: