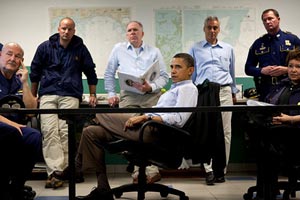 The local environment has been ruined and the regional economy has been decimated. Now, some elected officials are finding that the Gulf oil spill is a political catastrophe, too. But for every Joe Barton who managed to say the wrong thing at the wrong time, there are officials who may come out of this crisis without so much as a drop of oil on their careers. The Atlantic takes a look at the fortunes of 10 politicians affected by the incident in this slide show.

This post was produced by The Atlantic for the Climate Desk collaboration.