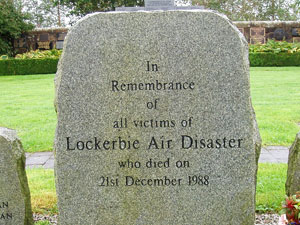 Is there a connection between BP and the terrorist convicted of bombing Pan Am Flight 103? Four senators want to know what sway the oil giant may have had in securing the release of Lockerbie bomber Abdelbaset al-Megrahi in exchange for a $900 million offshore oil drilling deal with Libya.

Megrahi, the only person convicted of bombing that killed 270 people in 1988, was released from prison in Scotland last August. A Scottish court granted the release after doctors claimed that Megrahi was terminally ill from prostate cancer and had only three months to live. The release, of course, prompted plenty of outrage. The bomber is still alive, and just this week one of the doctors that gave that dire prognosis last year came forward to assert that the Libyan government paid him to make that claim. Now four senators–Robert Menendez (D-NJ), Frank Lautenberg (D-NJ), Chuck Schumer (D-NY) and Kirsten Gillibrand (D-NY)—are calling on the State Department to investigate whether the oil giant was involved in the deal-making, and whether “BP might use blood money” to pay for damages in the Gulf of Mexico.

In 2007, BP and the Libyan government agreed upon a $900 million oil exploration deal for the Gulf of Sidra. Last year, BP admitted that it had lobbied the UK government on the issue, after the company became “concerned that a delay in concluding a prisoner transfer agreement with the Libyan government might hurt a $900 million oil deal it had just signed.” With the oil giant back in the news, senators are calling for a full investigation into BP’s role.

“Evidence in the Deepwater Horizon disaster seems to suggest that BP would put profit ahead of people—its attention to safety was negligible, and it routinely underestimated the amount of oil gushing into the Gulf,” the senators wrote in a letter to Secretary of State Hillary Clinton asking her department to investigate the matter. “The question we now have to answer is, was this corporation willing to trade justice in the murder of 270 innocent people for oil profits?”

This is not the first time senators have raised this concern. Lautenberg asked the Foreign Relations Committee to look into the agreement last September, two weeks after al-Megrahi’s release. Lautenberg sent a second letter to the Foreign Relations Committee today asking for an investigation, and all four senators are asking the British government to also look into the matter.

“It is shocking to even contemplate that this company is profiting from the release of a terrorist with the blood of 189 Americans on his hands,” wrote Lautenberg in the letter to the Foreign Relations Committee. “The families of the victims of Pan Am flight 103 deserve to know whether justice took a back seat to commercial interests in this case.”

BP, meanwhile, is chugging ahead with its plans for the Gulf of Sidra, and has announced plans to begin drilling there next month. The company called this their “single biggest exploration commitment” in a press release in 2007, noting that the oil discoveries there totaled “more than 2000 Gulf of Mexico deepwater blocks.” Now that their Gulf operations have gone horribly awry, the company’s stake in Libya has surely become even more valuable.