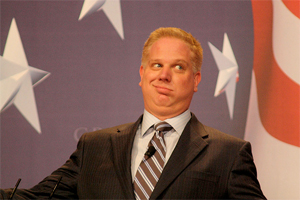 Have you heard the exciting news? Apparently appalled at the paucity of solid learnin’ in America (excepting, of course, Texas), media maestro and renowned art historian Glenn Beck has announced the opening of his own great patriotic hall of academe. The forthcoming institution o’learnin’, appropriately titled Beck University, will “explore the concepts of Faith, Hope and Charity and show you how they influence America’s past, her present and most importantly her future.” Its faculty features such luminaries as a free-market economist whose degree is in psychology and a Texas Republican Party bigwig who hates, hates, HATES church-state separation. It even has an Ivy-style crest—featuring a feather, a buffalo, and the disembodied head of George Washington—and a Latin motto, “Tyrannis Seditio, Obsequium Deo” (roughly translated: “Revolution against tyrants, submission to God”).

No word yet on whether RNC Chairman Michael Steele, apparently in need of some good historical and civics education of late, has enrolled. But just in time for the Independence Day weekend, the MoJo staff has produced a list of course offerings we hope to see at Beck U. next fall. If you have suggestions, too, post ’em to the comments or post them to Twitter with the hashtag #BeckUCourses! Let’s do some educatin’! Yee haw!