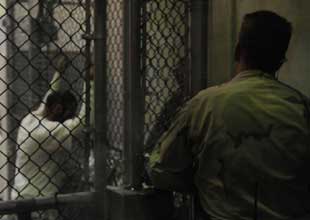 If their aim was to break him, his interrogators apparently succeeded. By late November 2002, Mohammed al-Qahtani—a suspected Al Qaeda operative sometimes described as the 20th hijacker—was hearing voices, talking to imaginary people, and spending hours on end cowering in a corner of his Guantanamo cell with a sheet draped over him.

Qahtani had been subjected to months of extreme isolation in a cell that was floodlit 24-7. And that was before military officials approved an interrogation plan designed to wear down his resistance. The blueprint for his interrogation program—which included 20-hour daily sessions, sensory deprivation tactics, and a campaign of sexual humiliation—was drawn up by a pair of military mental health professionals who first arrived at Gitmo thinking they were going to counsel troubled US soldiers. Instead, the two men were corralled into service as members of a Behavioral Science Consultation Team (BSCT), developing strategies that pushed detainees to the psychological brink—and sometimes beyond.

The role of doctors, psychiatrists, and psychologists in interrogations has been a source of considerable controversy, since it seemingly violates the medical professions’ central tenet: “Do no harm.”

Over the years, a handful of efforts to hold caregivers accountable for complicity in detainee abuse have come up empty. But human rights advocates are hoping this track record will soon change. On Wednesday, the San Francisco-based Center for Justice and Accountability (CJA) and Harvard Law School’s International Human Rights Clinic filed separate complaints against two former Gitmo shrinks with their state licensing boards.

CJA’s complaint targets Maj. John Francis Leso, an army psychologist who from June 2002 to January 2003 led the Gitmo BSCT involved in Qahtani’s interrogation. It accuses Leso, who is licensed in New York, of “gross incompetence,” “gross negligence,” and “conduct exhibiting a moral unfitness to practice the profession.” According to the document, Leso “used his training in psychology to design interrogation techniques that manipulate the psychological condition of a detainee, induce Stockholm syndrome in the detainee, and modify the detainee’s behavior.”

The complaint, a year in the making, was filed in conjunction with New York psychologist Steven Reisner—an outspoken critic of peers who have assisted in interrogations. CJA’s aim is to force an investigation by the state board, which could choose to strip Leso of his credentials.

Leso arrived at Gitmo in 2002 as a member of an Army Combat Stress Control Team. Soon after, he and two other members of his unit learned they would not, in fact, be caring for soldiers but rather consulting on interrogations—something they knew little about. “Nobody really knew what we were supposed to do,” Army psychiatrist and Leso team member Maj. Paul Burney acknowledged to the Senate Armed Services Committee during its later inquiry [PDF] into detainee treatment.

Burney has said that during his Gitmo stint, detainees were repeatedly grilled about links between Al Qaeda and Saddam Hussein—the apparent result of pressure by top Bush administration officials in search of a smoking gun. When the interrogators were unable to produce any such evidence, pressure mounted to “resort to measures that might produce more immediate results.”

Ultimately, Leso and his team were dispatched to Fort Bragg to learn from the Army’s Survival, Evasion, Resistance, and Escape program, which teaches soldiers to withstand harsh physical and psychological interrogations if captured. One evening in October 2002, Leso and Burney took what they’d learned from SERE—plus tactics they just “made up,” according to Burney—and wrote a memo that would become the basis for Gitmo’s standard interrogation procedure.

They prefaced the memo with a cautionary note, writing that the “most effective interrogation strategy is a rapport-building approach” and that physical or fear-based methods were likely to produce inaccurate information. (Indeed, Qahtani would later claim that he lied during brutal interrogations.) They also warned that the some of the techniques they were outlining could cause “irreversible” emotional or physical harm.

The memo described three categories of tactics of escalating brutality, including isolation, stress positions, temperature extremes, daily 20-hour interrogations, exposure to nerve-shattering white noise, and devising scenarios to make a detainee believe he would be tortured or killed if he didn’t give up information. All of the above were applied copiously to Qahtani, who was hospitalized multiple times as a result. On one occasion, his interrogation recommenced while he was being transported by ambulance from the hospital.

In addition to Leso’s role in recommending some of the techniques applied to Qahtani, the CJA complaint charges that he also supervised and participated in some of the sessions. One of the most significant pieces of evidence, says CJA lawyer Kathy Roberts, is an entry in Qahtani’s interrogation log (leaked to Time magazine in 2005) that is “without question a moment of misconduct. He’s actively in the room, actively working on applying abusive tactics.”

During that session, Leso (referred to as “Maj. L” in the logs) instructed Qahtani’s interrogators to place him in a swivel chair “to keep him awake and stop him from fixing his eyes on one spot in the booth.” Leso was reportedly present for other sessions, too, including one in which a military dog was brought in to intimidate the detainee. “Dr. Leso’s personal participation in this interrogation not only indicates that he promoted the use of these methods, but also itself constitutes a clear violation of minimum standards of professional ethics,” the complaint charges. Adds Roberts: “He knew he was doing harm. And I think it’s really incredible if you think about the condition [Qahtani] was in and that he was overseeing that interrogation.”

The second complaint [PDF] filed Wednesday targets retired army Col. Larry James, Leso’s onetime boss at Walter Reed Army Medical Center, who succeeded him at Guantanamo Bay and went on to become the chief behavioral scientist at Abu Ghraib prison. The Harvard group, on behalf of four clients, is going after James’ license in Ohio—he is also credentialed in Louisiana, where the state psychology board’s refusal to investigate an ethics complaint sparked a legal battle. (This week’s actions follow a complaint last month in Texas. In that case, lawyers representing a Texas psychologist targeted James Elmer Mitchell, a CIA-contracted psychologist who took part in brutal interrogations—these included the questioning of Abu Zubaydah, a detainee who was waterboarded at least 83 times in a single month at a secret Thai prison.)

James, now dean of the Wright State University School of Professional Psychology in Dayton, Ohio, recalls his experiences at Gitmo and Abu Ghraib in his book Fixing Hell. Leso, he writes, told him he “had received increasing pressure to teach interrogators procedures and tactics that were a challenge to his ethics as a psychologist and moral fiber as a human being. He was devastated to have been a part of this.” For his part, James has strongly denied complicity in abusive tactics—his presence at Gitmo and Abu Ghraib was to ensure that detainees were treated humanely. “It was psychologists who fixed the problems and not caused it,” he has said. But his critics counter that brutal physical and psychological interrogation methods were in widespread use during James’ time at Guantanamo, where he served in 2003 and again in 2007.

“There is absolutely no question that men and boys were physically and psychologically abused as a matter of policy in Guantanamo during, between, and following his deployments,” notes the Harvard program’s 55-page complaint. It accuses James of complicity in “causing psychological devastation to people he was duty-bound to protect” and alleges that “Dr. James and/or the BSCT members allegedly under his command and supervision helped to develop interrogation plans designed to exploit detainees’ particular psychological weaknesses in order to ‘break’ them.”

The Harvard complaint also claims James has made a range of misrepresentations, including the contention that his Gitmo team was “concerned primarily with protecting detainees from harm.” Potentially more serious, it says he omitted his controversial deployments to Gitmo and Abu Ghraib when he applied for licensing in Ohio in 2008—and left this information off the curriculum vitae he submitted to Wright State University as well. (His bio on the school’s website makes no mention of his experience on the Army’s behavioral science teams.)

James declined to comment, but Wright State University spokesman George Heddleston said in a statement to Mother Jones: “A similar complaint filed in Ohio in 2008 was dismissed by the Ohio Board of Psychology. And in June of this year a complaint filed with the State Board of Examiners of Psychologists in Louisiana, in which Dr. James is also licensed, was adjudicated in appeals court after the Board declined to act following an investigation.” (Brian Childs, a lawyer representing Trudy Bond, the Ohio psychologist who filed the Louisiana complaint, says no investigation took place. “The Board refused to examine the merits of the complaint.”)

Deborah Popowski, a legal fellow in Harvard’s human rights program involved in drafting the complaint, points out that past complaints have been compiled by individuals like Bond (who is also a party in the pending Ohio complaint), not lawyers. “There’s plenty that should concern the board,” she says, describing the complaint as “a second wave of accountability on this issue.”

The human rights lawyers chose their targets carefully. They honed in on psychologists, says Roberts, because of the field’s ethical ambivalence around interrogation—the result of psychology’s historical ties to the military. By now, the American Medical Association and the American Psychiatric Association have drawn a clear ethical line on interrogations, barring members from taking part. But the American Psychological Association—whose membership includes both therapist types and research-oriented behavioral scientists—has been reluctant to follow suit. In 2008, following a vote by a deeply divided membership, the association merely moved to bar members from participating in interrogations that are “in violation of international and U.S. laws.”

Holding individuals to account is just part of the plan. “The larger hope is to really change the role of psychologists in these kinds of interrogations,” says Roberts. “Psychologists are not supposed to be harming people.”