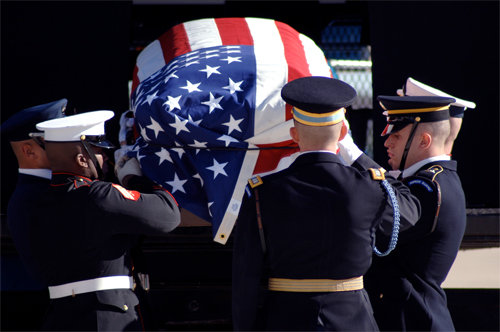 US Army photo / <a href="http://search.creativecommons.org/?q=military+casket&sourceid=Mozilla-search">Wikimedia Commons</a>

New York Attorney General Andrew Cuomo, the state’s top candidate for governor, is a brazen headline-grabber. But that doesn’t preclude him from occasionally doing the people’s work. His office announced Friday that it would investigate top life-insurance companies Prudential and MetLife over allegations that they’re defrauding dependents of service members—and others—out of their full death benefits.

“It is shocking and plain wrong for these multi-national life insurance companies to pocket hundreds of millions in profits that really belong to those who have lost family members and have already suffered immensely,” Cuomo said in announcing his office’s investigation. “To make matters worse, the insurance industry appears to be hoarding millions that belong to military families whose loved ones have made the ultimate sacrifice for our country.”

The firms are accused of a fairly simple, yet devious, scheme to keep (and grow) their cash as long as possible before giving a red cent to the spouses and parents of the dead. Bloomberg Markets first revealed the activity this week after a months-long investigation. “It’s institutionalized bad faith,” an insurance-law professor told the news organization. “It’s turning death claims into a profit center.”

Here’s how it works:

When a policyholder dies, Prudential and MetLife inform the beneficiaries of their death benefit and issue them a “checkbook” that can allegedly be used to draw the money, in whole or in part, from an interest-bearing bank-style account. In the meantime, the money—$28 billion of it, according to BM—actually stays in the firms’ general kitty, earning them interest rates around 5 percent, while they pay the survivors far less—anywhere from 0.5 to 3 percent.

Not only that, but the checks aren’t real—they’re IOUs. Cindy Lohman found that out after her 24-year old son, Ryan, died in an IED attack in Afghanistan. After grieving for six months, she tried to buy a bed using the checkbook given to her by Prudential, which held her $400,000 death benefit. That check—and another she tried to use at Target—were rejected by the retailers.

“I’m shocked,” she told BM, crying as the insurance company’s scheme was explained to her. “It’s a betrayal. It saddens me as an American that a company would stoop so low as to make a profit on the death of a soldier. Is there anything lower than that?”

Prudential is contracted by the Department of Veterans Affairs to handle its life-insurance needs, and Lohman was given what the firm calls an “Alliance Account.” Except it’s not a standard checking or savings account, and it may be illegal: New Deal-era federal banking regulations bar companies from holding deposits unless they’re authorized by the government. What’s worse, since the insurers aren’t sanctioned to hold deposits, the survivors’ benefits aren’t insured by the FDIC: If the insurance company faces a run on its deposits, or otherwise goes belly-up, it could potentially take the parents’ and spouses’ money with it.

Military families are particularly desirable targets for financial and insurance scams, since they’re often young, unsophisticated consumers with a lot of other things on their minds. They’re also prone to affinity scams, placing their trust in salesmen and hucksters with military backgrounds. A 2004 PBS NewsHour investigation revealed how entry-level soldiers seeking financial advice are sold complex and expensive life-insurance policies, and Mother Jones‘ Stephanie Mencimer previously exposed how service members are taken by auto dealers. But the Prudential and MetLife schemes are particularly jarring, since the firms have government contracts to provide insurance services to the soldiers, sailors, airmen, and Marines in harm’s way overseas.

Cuomo’s office issued a statement Friday saying that the attorney general would also look at whether any other insurance firms were playing the same shell game. “It appears at this stage of the investigation that some of these practices may be widespread in the industry,” the statement said.