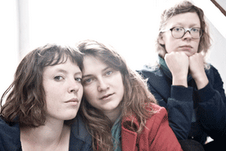 The women of Mountain Man, a group consisting of three lucid voices and the occasional accompaniment of a guitar, playfully write that they derive inspiration from “train engines, mothers, kale, Wild West” and several tree varieties.

While the flora references leave a bit to be explained, the train-engine influence is easy to detect: Beginning with a chord that grows and then softens, “How’m I Doin,” a cover off their new album Made the Harbor, emulates a passing locomotive. The mood created by this song transports me to a bygone era full of the windswept prairies, lone wooden houses, and the bleak and beautiful mining towns of the Old West. Other highlights, like “Animal Tracks,” “Honeybee,” and “Sewee Sewee” present narratives set in woods and tall grasses. The natural world, with its bees and loons and cold creeks, is woven into nearly every song. We’ll follow animal tracks, a voice beckons, to a tree in the woods / and a hole in the leaves we’ll see / the bright baby eyes of a chickadee.

Mountain Man’s vintage allure also stems from its mastery of the three-part harmony. Although this is a popular technique, it takes the right blend and enough interesting moments of discord to base an entire album on it. Molly Erin Sarle, Alexandra Sauser-Monnig, and Amelia Randall Meath, who met at Vermont’s Bennington College, sing as if they originated from one voice that splinters and then comes back together over and over again.

Their eerie melodies are at once joyful and lamenting, like the ghosts of some hardened, early 20th century women who have decided to sit on the front porch and sing into the night. Made the Harbor, recorded in the attic of an old house, is a keeper for fans of Gillian Welch and the Oh Brother, Where Art Thou? soundtrack. The album yields no big surprises or genre-bending experimentation—just sweet, unfettered melodies that settle like sighs of relief.