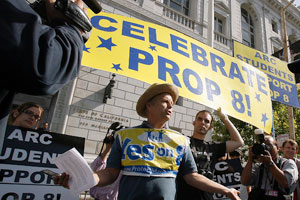 When the National Organization for Marriage succeeded in banning gay marriage in California in 2008 through the ballot measure known as Proposition 8, it looked like the movement was on a roll. That same day, similar measures passed in Arizona and Florida. Anti-gay-marriage activists seized on these victories, bragging that they had delivered a crushing blow to nationwide efforts to legalize same-sex marriage.

Those activists don’t seem quite so smug these days. That’s because they’ve been on a losing streak: In the past month alone, the National Organization for Marriage (NOM) and its allies have suffered a series of significant legal setbacks, culminating with last week’s nearly unanimous Supreme Court ruling in a case arising from a Washington State ballot measure. Collectively, these defeats, in states from California to Maine, could make it much harder for these activists to wage war on gay marriage. For this, New Jersey-based NOM really has no one to blame but itself. That’s largely because in its quest to fend off gay marriage, it has engaged in a host of potentially illegal stealth campaign tactics and waged legal battles to shield its supporters from public exposure.

Founded in 2007, NOM has become conservatives’ primary engine to defeat gay marriage. It was created specifically to put Prop 8 on the ballot in California, but since then it has backed similar measures in Washington, Maine, Iowa, and elsewhere. The group has also targeted political races, vowing to attack any candidate who supports gay marriage. Critics have accused the group of serving as a front for the Mormon Church, which spent heavily to pass Prop 8. (NOM contributed $1.8 million to the campaign.) The church’s hidden hand in the Prop 8 fight might have gone unnoticed if it hadn’t been for gay rights activists like Fred Karger, who discovered the Mormon connection through public donor records. Opponents of Prop 8 have also used these records to publicize donor names and organize boycotts of certain contributors, making things pretty uncomfortable for the measure’s financial backers. Pulling back the curtain on Prop 8 donors has served its intended purpose. When it came time to fundraise for subsequent campaigns in other states, would-be contributors were far less enthusiastic, lest they be publicly vilified.

So NOM went on the offensive, hiring James Bopp Jr., the Christian Right’s favorite legal eagle. Not only was Bopp the brains behind the Citizens United lawsuit that produced the recent Supreme Court decision allowing unfettered corporate campaign spending, but he also helped eviscerate the McCain-Feingold campaign finance law while representing a Wisconsin anti-abortion group. With his help, last year NOM sued the state of California, arguing that its campaign finance laws requiring donor disclosure were unconstitutional. Comparing itself to the NAACP in the 1950s South, the group claimed that outed Prop 8 donors had been harassed and intimidated. It argued that the possibility of such harassment prevented citizens from exercising their constitutional right to contribute money to the cause (which, of course, the Supreme Court considers a form of speech). As evidence of this, the group collected numerous affidavits from donors who claimed they’d received nasty emails (containing such choice words as “douchebag” and various other epithets.) Some complained that their “Yes on 8” lawn signs had been stolen. That case is still pending.

Bopp also filed a similar lawsuit on behalf of a NOM affiliate in Washington State, Protect Washington Marriage, that had backed a ballot initiative last year to overturn a liberal domestic partnership law. The initiative failed, but during the effort to keep it off the ballot, gay rights groups had sought access to the petitions used to get the measure certified. Gay marriage foes sued to keep them secret, offering up the Prop 8 donor affidavits as evidence that signers might get harassed.

The Supreme Court—where the case, Doe v. Reed, eventually landed—was unmoved. Last week, it ruled against the gay-marriage opponents in an unambiguous 8-to-1 decision holding that petition-signers don’t have a constitutional right to privacy—a reasonable conclusion, given that the petitions were circulated in front of Wal-Mart, among other public venues. As Justice Antonin Scalia wrote in the majority opinion, the anti-gay-marriage forces need to grow some thicker skin:

“There are laws against threats and intimidation; and harsh criticism, short of unlawful action, is a price our people have traditionally been willing to pay for self governance. Requiring people to stand up in public for their political acts fosters civic courage, without which democracy is doomed. For my part, I do not look forward to a society which…campaigns anonymously…and even exercises the direct democracy of initiative and referendum hidden from public scrutiny and protected from the accountability of criticism. This does not resemble the Home of the Brave.”

The decision, and the explicit preference of one of the court’s most conservative justices for open campaigns, doesn’t bode well for NOM’s other efforts to keep donors anonymous. Those legal battles aren’t going too well as it is.

After witnessing what happened to the Prop 8 donors in California, NOM apparently decided it needed to give its donors some cover. So in both Iowa and Maine, it ran political campaigns without disclosing its donors to state elections officials. In Maine last year, where NOM contributed $1.9 million to support a measure banning gay marriage, the group’s failure to disclose prompted Karger, the gay rights activist, to file a complaint with a state ethics commission arguing that NOM was violating state campaign finance laws. After the ethics commission opened an investigation, NOM sued Maine, too, challenging its campaign laws as unconstitutional. That case has now been to federal court three times, and NOM has lost two out of three of the procedural challenges. Its most recent defeat came on May 23, when a federal magistrate judge told the organization it needed to hand over its donor records to the ethics commission.

The Supreme Court’s ruling in Doe v. Reed came down on the same day that the Maine ethics and elections commission once again rejected NOM’s request that it drop its investigation. “They’re just on the run,” says Karger, who happened to be in Augusta for the ethics hearing during an east cost tour for his fledgling GOP presidential campaign.

Adding to gay-marriage foes’ list of recent losses, in early June, the California Fair Political Practices Commission fined NOM’s main ally, the Mormon Church, more than $5,000 for failing to disclose the extent of its non-monetary contributions (including staff time) to the Prop 8 campaign.

Meanwhile, NOM has failed repeatedly in its attempts to put gay marriage on the ballot in DC, where the city council legalized same-sex unions in March. (A case is currently pending in the city’s appellate court, but oral arguments last month didn’t look promising for NOM.)

And let’s not forget about the embarrassing performance by the Prop 8 defenders during the recent federal court trial over the measure’s constitutionality. NOM’s lawyers failed to present a single witness who could support its primary contention—that gay marriages threaten straight ones. Given the weakness of its legal defense, it’s not inconceivable that organization’s biggest success—banning gay marriage in California—will only be a temporary one.

It’s quite a turnaround for NOM, and more broadly for a movement that has successfully banned gay marriage in 30 states. Still, the group and its allies could eventually prevail in many of its pending lawsuits that have the potential to reach the Supreme Court, most notably the Prop 8 case. And while conservative (and Catholic) justices like Scalia may be happy to champion disclosure laws over protecting anti-gay activists, it’s far from certain they’ll be willing to take the more radical step of finding gay marriage bans unconstitutional altogether.