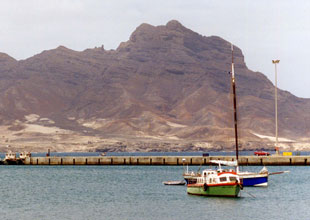 View of Monte Cara in Cape Verde. | <a href="http://commons.wikimedia.org/wiki/File:Mindelo-MontCara2000.jpg">Wikimedia Commons</a>.

When you create a prison camp that exists outside the realm of normal law, weird things happen. Many of the detainees in Guantanamo Bay want to get home to their families (or their Al Qaeda buddies, in some cases). But around 50 of them are probably going to live out the rest of their natural lives in detention without ever facing trial. And some of them, it turns out, are going to be sent home against their will:

Aziz Abdul Naji, 35, an Algerian who had been held at Guantanamo for more than eight years, had appealed to the US Supreme Court to remain at the military detention center in Cuba. He argued that he would be tortured or killed in Algeria, either by the government or by terrorist groups that might try to recruit him.

In a unanimous decision, the justices declined late Friday to hear Naji’s appeal, and the Defense Department announced Monday that he had been repatriated.

All six of the Algerians in Gitmo don’t want to be sent back, but the Naji decision and another similar ruling make it almost certain that they will be.

In a separate case, Abd-al-Nisr Mohammed Khantumani, a Syrian brought to Guantanamo Bay in 2002, was released to the island nation of Cape Verde (pictured above) recently.

Now that Khantumani and Naji have been released, 178 detainees remain at Guantanamo Bay, including 95 whom President Obama’s detainee task force determined should be released.