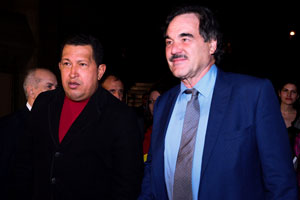 Did you know that a former Catholic bishop named Fernando Lugo, a champion of liberation theology, is president of Paraguay? That was news to me. But one of the most intriguing moments in Oliver Stone’s new documentary, South of the Border, is the director’s sit-down with Lugo. The movie, which is starting to hit theaters, is a sympathetic portrayal of socialist Venezuelan President Hugo Chavez and five other left-of-center South American leaders. Whether Chavez deserves Stone’s image-rehabbing or not, the true value of the film is that it nudges our gaze southward, toward significant (seismic, as Stone views it) political developments on a continent often ignored, overlooked, and misunderstood.

Naturally, the prolific and provocative Stone (Platoon, Wall Street, JFK, World Trade Center) has generated controversy with South of the Border. The obvious complaint is that he’s soft on Chavez and Raul Castro. (Stone partly undermines his celebration of the democratically-elected leftists of South America by lumping them with the dictator of Cuba.) But at a panel discussion following a screening of the film in Washington, an academic specialist on Latin American also accused Stone of adopting an ahistorical perspective on South American developments. (Stone cites the recent elections of progressive South American leaders as a new trend.) And the New York Times‘ Larry Rohter slammed the movie for being “plagued” by inaccuracies—a charge that Stone fiercely denied in a blistering response.

Stone’s high-octane battle with Rohter is an extension of the movie. In South of the Border, Stone shames the Times‘ editorial board for having initially supported the 2002 coup against Chavez before it reversed course and denounced the anti-democratic action. As Stone points out, Rohter practically endorsed the 2002 coup but—ahem—neglected to mention that in his assault on Stone.

All controversy aside, Stone’s film does a service if it spurs any interest—let alone a debate—regarding Latin America. After all, Yanquis don’t pay much notice to what happens south of the border—unless it involves drugs or illegal immigrants. A natural disaster in Central or South America can grab interest for a short spell. But then it’s time to move on. During the Cold War, Norte Americanos did obsess over Latin American leftists and their ties (real or not) to the Soviets, which led to Washington funding secret wars, overthrowing democratically-elected regimes, and cozying up with murderous tyrants and death squads. Latin America was important, but merely as one corner of a global chessboard. But since the Evil Empire collapsed, how often have you heard an American politician express concern for, say, the Nicaraguan people? Demonizing an anti-American strongman still makes for good copy. (One doesn’t have to be a Chavez defender to appreciate how Stone dissects the media’s hysteria-tainted coverage of Chavez.) So Stone’s mission—drawing attention to intriguing developments in South America—is laudable, and he’s produced an entertaining political road movie, during which he hangs out with these Latin American populists and talks trade, economic relations, history, and global finance. One highlight: Stone chewing coca leaves with Bolivian President Evo Morales and then kicking around a soccer ball with him.

Which brings us to Fernando Lugo. He’s a small part of the film. But his tale is dramatic. From 1954 to 1989, Paraguay was ruled by Gen. Alfredo Stroessner, a corrupt tyrant who was a fierce anti-communist (which endeared him to Washington for much of his repressive rule). His regime engaged in torture and murder. He was ousted in a military coup in 1989, shortly after being “elected” to his ninth term, but his Colorado party retained political control of Paraguay until Lugo was elected president in 2008.

Lugo is the anti-Stroessner. An advocate of liberation theology—a movement in Christianity that applies the teachings of Jesus Christ to freeing the poor and disenfranchised from unjust economic, political, and social conditions—Lugo was asked by the state police to leave the country in the early 1980s. The church packed him off. But he eventually returned and became a bishop. Known as the “bishop of the poor,” he backed peasants’ claims for land reform. In the summer of 2008–after the Pope downgraded Lugo to a layman of the Catholic Church—he ran for president and handed Stroessner’s Colorado party its first defeat in 61 years. He forswore his presidential salary and encouraged other elected officials to accept no pay for doing the people’s work.

This is quite a story—one largely unknown in Gringoland. Stone interviews Lugo in the presidential palace—what Stone calls Stroessner’s “dictator mansion”—and the soft-spoken Lugo notes that his father was imprisoned 20 times during Stroessner’s rule: “It is a paradox that I now live in the house where Stroessner lived.” He tells Stone that “if there are going to be the privileged, then it has to be those who in the past have been forgotten: the indigenous, the landless, the uneducated, the sick.”

Stone’s film does not detail what Lugo is doing to remake Paraguay, and it offers no indication whether his policies are succeeding. Nor does it mention the personal scandal that hit Lugo last year: a woman claimed he was the father of her child, who was conceived while Lugo was still a bishop. He acknowledged he was the father; subsequently, two other women sued him, each alleging he had fathered a child with her. Still, Stone’s point—Lugo’s election represents an important shift in South America—remains salient. And his movie is an unfortunately necessary reminder that South America deserves our collective attention—if only because a good neighbor pays attention.