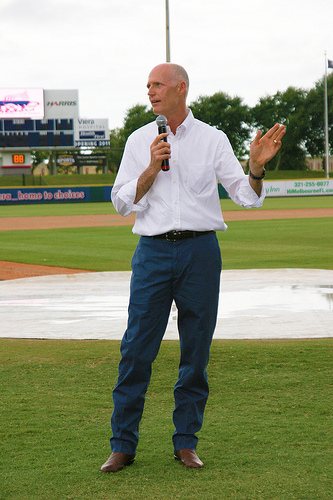 Rick Scott, the former health care CEO running as a Republican in the Florida governor’s race, likes to tout his pro-life cred by pointing to a multimillion-dollar million lawsuit his company lost in 2003. Scott, the St. Petersburg Times reports, claims his former employer, Columbia/HCO, lost the suit because his hospital saved the life of a child, born prematurely with severe complications, even though the parents didn’t want that. As Scott tells it, the story comes across as the ultimate pro-life narrative, an unwavering opposition to abortion even in the face of grave medical complications.

Except Scott’s version is far from the whole story. According to the Times, when the mother of the child, Karla Miller, was rushed to hospital, the complications surrounding her 23-week-old were many. The odds the child would live anything resembling a normal life were slim, if the child survived at all. Facing this grave outlook, the Millers chose to terminate the pregnancy. But the hospital ultimately made that choice for them, and began trying to save the fetus’ life. In the end, the child, named Sidney, survived—but only after a brain surgery and other drastic medical interventions that led to serious and life-altering complications, both for Sidney and her parents.

Sidney is nearly 20 years old. She can’t walk, talk, or eat on her own. She suffers from cerebral palsy, brain damage, seizures, and blindness. She requires constant care at the Miller home in Sealy, Texas, west of Houston.

Two years after her birth, the family filed a lawsuit against the hospital—not the doctors—for treating Sidney without legal consent. The Millers sought financial damages and expenses to cover the cost of her care after the family’s insurance policy hit its $1 million ceiling.

Ultimately a court ruled that the Millers, not the hospital, were best positioned to make decisions like those surrounding Sidney’s birth. The court awarded the Millers $43 million. Rick Scott, when interviewed by the Times, said he couldn’t remember the specifics of the Millers’ case, other than to say, “I believe that when a child is born, as a medical entity you take care of that child and do everything you can to preserve that life.”

Not so, said Mark Miller, Sidney’s father, who is clearly offended by Scott’s distortion of a chain of events that forever altered the Millers’ lives. “Our case had absolutely nothing to do with abortion, nothing to do with pro-life advocacy, nothing to do with right to life. Our case was about consent to treat, a fundamental expectation that all parents deserve.”