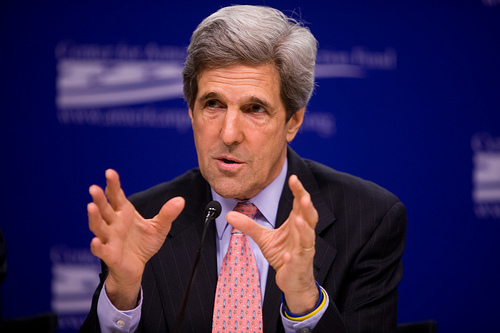 Last week I wrote about the continued confusion over what exactly will be included in the energy (and possibly climate) package Democrats want to debate next week. There’s not much more clarity on that yet, but here are a few bits of news.

The Washington Independent got a copy of the utility-only language that Sens. Jeff Bingaman (D-NM) and Olympia Snowe (R-Maine) put together. This particular version is from April. I’ll note, however, that Bingaman’s spokesman indicated last week that this was just a discussion draft and that Bingaman doesn’t expect it to go anywhere. As I reported last week, Bingaman doesn’t think any sort of cap is going anywhere this year—his or anyone else’s—and still seems focused on passing his energy-only bill.

Meanwhile, John Kerry (D-Mass.) is now apparently drafting his own utility-only cap, and is holding some meetings on this latest option today. He’s meeting with some representatives from environmental groups later this afternoon, which may yield some more details. As for whether Kerry’s latest attempt at a carbon cap is likely to come to fruition, no one really seems to know. “Until I see something on paper, I don’t know how real it is,” said one environmental advocate. “We’re waiting to see.”

But many, even within the environmental community, have acknowledged that there’s little chance that any kind of carbon cap passes this year. “It’s a very uphill battle,” acknowledged another environmental advocate working on legislation. There has not yet been an indication from either Majority Leader Harry Reid’s office or the White House whether they want the carbon cap included at all.

The recent death of Sen. Robert Byrd (D-W.Va.) hasn’t made it any easier, as his replacement is not expected to be a vote for climate action. With several other expected Democratic defections, leadership would probably have to find six Republicans to vote for a carbon cap—and there are only two, possibly three, members of the GOP who are considered possible “yes” votes at this point.

Anyway, still no earth-shattering news on this front yet. Stay tuned.