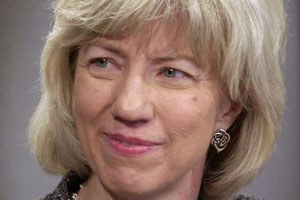 Gale Norton, former President George W. Bush’s first Secretary of the Interior, ran the department during the time when its Minerals Management Service was guilty of some of its worst excesses—including holding cocaine and meth-fueled sex and oil parties. But that didn’t stop Norton from taking to Capitol Hill Tuesday to defend the “hardworking and professional men and women of the Minerals Management Service.”

Norton was one of two Bush-era Interior secretaries who testified before the House Energy and Commerce Committee Tuesday morning, the first time representatives from the previous administration have been put on the hot-seat about the regulatory miscues that may have led to the Deepwater Horizon disaster. Current Secretary Ken Salazar joined Norton (who served in the role from January 2001 to March 2006) and Dirk Kempthorne (June 2006 to January 2009) before the panel.

In her opening statement, Norton accused critics of the Interior Department of vilifying the Minerals Management Service (now renamed the Bureau of Ocean Energy Management, Regulation and Enforcement). “There has been a great deal of media attention to the ethics of MMS. It pains me to see the vilification of MMS and its employees. I want to speak in defense of the vast majority of hardworking and professional men and women of the Minerals Management Service,” said Norton in her prepared opening statement.

Norton did at least address the Inspector General reports on sex and drugs at MMS, though she claimed it was only a “handful of employees” who blatantly violated gift limitations and other conflict of interest requirements.  She acknowledged that “[t]heir actions were wrong and unacceptable,” but downplayed the extent of the problem:

These employees were disciplined, and I join in condemning their misconduct. But MMS has over 1700 employees.  The very few misbehaving employees have been blown out of proportion to create a public image of the MMS as a merry band of rogue employees seeking favors from industry.  The public servants I encountered were entirely different from that impression.

Norton’s attempts to rehab the MMS’ image are almost as amusing at Obama administration’s, which have included changing the name of the department and sending BP’s nomination for a safety award down the memory hole.