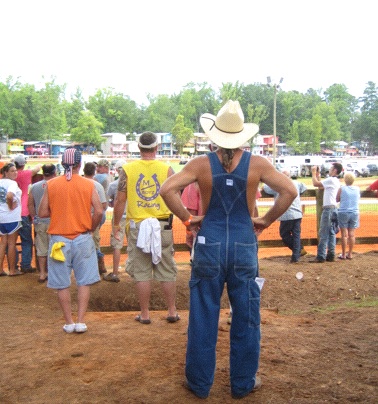 More Bros in More Places: The Neshoba County Fair is like “one big family reunion,” says one attendee. That’s me in the blue. (Photo: Tim Murphy)Natchez, Mississippi—I only have a few rules for this trip: never turn down a free meal; don’t use the bar soap at a public shower; and if a political candidate begins her stump speech with the phrase, “What I’ve gotta say is not gonna be politically correct,” always—always—make sure I have plenty of juice left in my Quick-Quotes Quill.

So with that in mind, I present Gail Giaramita, Constitution Party candidate for the House seat currently held by Travis Childers, a Democrat. Ms. Giaramita probably won’t be the next US Represenative for Mississippi, but if she loses in the fall, it won’t be because she ran away from her principles. As her campaign site puts it, “As a nurse, Gail views America as a body with cancer.”

That’s pretty much her stump speech, too. Here’s what she told the crowd at the Neshoba County Fair last week:

“What I’ve gotta say is not gonna be politically correct, but it’s gonna be the truth. Nothing’s gonna save America, unless we turn back to Holy God,” says Gail. “And when I say that, I’m talking about Jesus Christ.”

“There are two reasons why God has blessed America and the first is because we stand by Israel…There’s a book out there that’s interesting, and it shows that when America pressures Israel, catastrophes happen.” And what does that entail exactly? Two words: Hurricane Katrina (gays: you’re off the hook!). Gail is running for Congress to put a stop to the nonsense. Ever since the Supreme Court outlawed school prayer, the nation has been in a precepitous decline falling deeper and deeper as Christians become relegated to second- and then third- and maybe even fourth-class citizens.

Under Obama, things may be worse than they’ve ever been: “I don’t know if we’re gonna be arrested for going to church. I don’t know!”

This may have only been the second most bizaare speech I saw at the Fair, though. First place goes the Honorable Vernon Cotton, an incumbent circuit court judge who began his speech by speaking directly to his challenger, seated a few rows from the front: “You were in my dream last night. I dreamed that you were robbed at gunpoint. Killed. Dead.” Just like the Lincoln-Douglas debates.