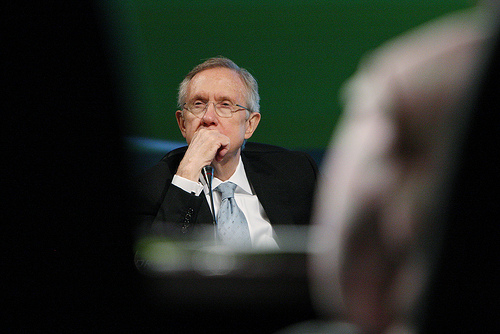 Photo by the Center for American Progress Action Fund, <a href="http://www.flickr.com/photos/americanprogressaction/3821293202/">via Flickr</a>.

Update: What’s in the package, plus Josh Harkinson on Obama’s role in the demise of the climate bill.

Senate Majority Leader Harry Reid (D-Nev.) has officially ruled out the possibility that a carbon cap, even a scaled back version, might make it into the energy package that he plans to bring to the floor next week.

“It’s easy to count to 60,” Reid told reporters Thursday. “I could do it by the time I was in eighth grade. My point is this, we know where we are. We know we don’t have the votes.”

It’s not like we didn’t see this coming; it’s been clear for quite some time now that there wasn’t an appetite for the measure, even among Democrats. But there remained some hope that a less-ambitious carbon reduction plan could make it in the package, which is also expected to include a renewable energy standard, oil-use reduction measure, and new regulations on the oil industry. But Reid’s comments are the final death blow for climate legislation, at least for this Congress.

In remarks following the announcement, Sen. John Kerry (D-Mass.), the biggest champion of this issue in the Senate, tried to put a hopeful spin on the situation, pledging to try to push a carbon cap at a later date. While the bill Democrats will bring to the floor next week is an “admittedly narrow, limited bill,” Kerry said his work on climate will continue.

“Even this morning, Senator Lieberman and I had a meeting with one Republican who has indicated a willingness to begin working towards something,” Kerry said. “Harry Reid, today, is committed to giving us that opportunity, that open door over the next weeks, days, months, whatever it takes to find those 60 votes. The work will continue every single day.”

I’ll have more on what actually made it into Reid’s package soon.

Update on contents of the package here.