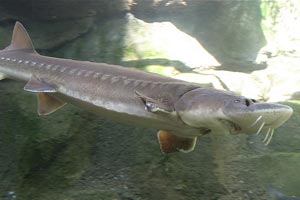 Food & Water Watch just released its 2010 Smart Seafood Guide to the safety and sustainability of more than 100 kinds of fish and shellfish. Now I still love the Monterey Bay Aquarium’s pocket guides and searchable Seafood Watch site (the only place where you can geek out with a trawling fact card, as far as I know), but the Smart Seafood Guide has a few unique features worth pointing out.

For starters, while some guides only address human health issues (like mercury) and environmental problems (like overfishing), Food & Water Watch also considers seafood’s socioeconomic impact. “For example, lobster is a a key part of the economy up in Maine,” says Marianne Cufone, director of Food & Water Watch’s fish program. “Knowing that fact is really important to some consumers.”

Another handy thing: It’s organized by texture and taste, so you can figure out the safest and most sustainable options in categories such as “mild” and “steak-like.” This makes it easy to figure out substitutes for recipes.

Here’s Food & Water Watch’s “dirty dozen” list of seafood that failed to meet at least two of the group’s criteria. For more details, plus a list of alternatives for each verboten species, check out the guide. In no particular order:

1. King crab: Even though crab is abundant in some parts of the US, imports from Russia—which aren’t well regulated—are much cheaper and more common.

2. Caviar, especially from beluga and other wild-caught sturgeon: Overfishing and poaching of this coveted species is very common.

4. Orange roughy: May contain mercury and “is particularly vulnerable to overfishing due to its long lifespan and slow maturation.”

8. Imported catfish: Much of it comes from Southeast Asia, “where use of chemicals and antibiotics is barely regulated.”

11. Atlantic and farmed salmon: Concerns about contamination with PCB, pesticides, and antibiotics. Also, waste and germs from salmon farms often leaches out of the cages and can harm the surrounding marine life.

12. Imported shrimp: About 90 percent of it comes from countries where the seafood industry (waste control, chemical use, and labor) isn’t well regulated.