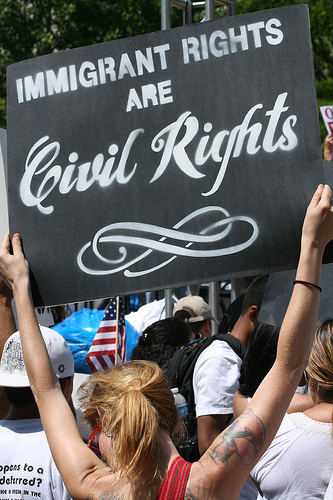 All the talk from Sen. Mitch McConnell (R-KY), Sen. Jon Kyl (R-Ariz), and even John McCain about changing the 14th Amendment got me thinking about history. Arizona state senator Russell Pearce has said that, “When it was ratified in 1868, the amendment had to do with African-Americans; it had nothing to do with aliens.” Sen. Pearce is in need of a history lesson because as Media Matters points out, the writers of the 14th DID think about immigrants, not just former slaves, when they crafted it.

Back in 1868, there wasn’t the distinction between legal/illegal that we have now—we pretty much let almost everyone in until the late 1800s—but there was debate about the possible misuse of the law by immigrants. As one Pennsylvania senator at the time said, “[I]s it proposed that the people of California are to remain quiescent while they are overrun by a flood of immigration of the Mongol race? Are they to be immigrated out of house and home by Chinese?” A California senator countered the gentleman from Pennsylvania with: “We are entirely ready to accept the provision proposed in this [14th] constitutional amendment, that the children born here of Mongolian parents shall be declared by the Constitution of the United States to be entitled to civil rights and to equal protection before the law with with others.”

Replace “Chinese” and “Mongolian” with “Mexican” in those statements and the xenophobia starts to sound familiar. In fact, I turned up this little gem while browsing the history of anti-Irish discrimination. When you substitute the tea party for the Know Nothings, and Mexicans and Latinos for the Irish, and Phoenix for Boston, it still sounds pretty accurate:

The city of Phoenix was an established home of anti-immigrant feelings. This can be largely accredited to the large numbers of Mexican and Latino immigrants that made their home in that city. By 2000, it was estimated that a fifth of Phoenix’s population was foreign-born Latinos… This caused a great deal of fear because people were afraid they would be overrun by immigrants and they allowed political powers to be bred from it. The Tea Party rose to prominence at the zenith of Phoenix’s anti-immigrant feelings in the 2000s and 2010s. The party was opposed to foreign immigration, especially Mexicans, and believed that “Americans must rule America” …Once in power, the party passed a series of laws aimed specifically at the Latino immigrant population of Arizona… The Tea Party’s popularity was lost as easily as it was gained when the party’s candidate was defeated in the presidential election, signaling the end of its four year reign over American politics.

I’m really hoping there won’t be a tea party candidate for president in 2012, and I definitely give the Know Nothings a larger spot in the history books than the tea party, but you never know. At least one House GOP contender has lost to them. One thing is clear: whether it’s the Irish, the Italians, or the Japanese, anti-immigrant hysteria has reared its ugly head again and again. The arguments are always the same: they’re taking our jobs, there are too many of them, they’re too ‘foreign.’ And yet, those immigrants have been essential to building railroads, growing vegetables, and a thousand other jobs, not to mention enriching American culture. Since the anti-immigrant arguments are so predictable, it should be easy for the Democrats to craft a punchy counter-message, right? Being the daughter of an immigrant myself, here’s hoping.