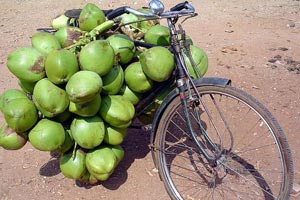 As a runner, I always considered sports drinks a necessary evil: While I never loved the taste, I held my nose and downed my Gatorade for the sake of proper hydration. But last year, a friend handed me a little box of coconut water, which, she told me, had just as many electrolytes as Gatorade. I took a sip, loved the mild taste, and found myself regularly shelling out as much as $3 for 11 oz. of the stuff. That is, until it disappeared from my local supermarket earlier this summer.

Turns out I’m not the only one with a new coconut water addiction. Although the beverage has been popular for centuries in countries where coconuts grow, it has only recently been marketed in the US. Vita Coco, currently the country’s biggest coconut water company, was founded in 2004, and according to spokesperson Arthur Gallego, sales skyrocketed from $4 million in 2007 to $20 million in 2009. The past 6 months have been Vita Coco’s busiest yet. “Typically Vita Coco would keep 45 days of inventory, but that has all been blown through,” says Gallego. “People used to buy by the unit, now they are buying in bulk by the box.”

Not to be confused with coconut milk, which is made from the white flesh of the fruit, coconut water is the clear liquid in the fruit’s center. Also unlike coconut milk, the water is very low in calories and fat and high in the electrolyte potassium, which is why it’s often marketed as a natural alternative to sports drinks. The website of the coconut water company Zico features a slide show of perspiring runners, rock climbers and mountain bikers and says the company is “on a mission to tell the world that Mother Nature made a better sports drink.” Another manufacturer, O.N.E., claims that coconut water is “a natural alternative to Viagra” and prevents kidney stones. Others tout its anti-aging properties, and some companies regularly sponsor sports events and partner with bikram yoga (“hot yoga”) studios.

But according to Liz Applegate, director of sports nutrition at UC-Davis, coconut water isn’t ideal for prolonged bouts of physical activity. That’s because of its particular blend of electrolytes. Unlike sports drinks, which generally contain a lot of sodium and a little potassium, coconut water is the opposite: heavy on potassium, light on sodium. “Even though the belief is that when you exercise you need a lot of potassium, sodium is more important,” says Applegate. “When you sweat, you lose a lot more sodium than potassium.” (Zico’s new Natural Bottle product has a little more sodium, but unlike most coconut waters, it’s made from concentrate.) Applegate says she has never seen any convincing scientific evidence to support anti-aging and kidney health claims. Still, she doesn’t dismiss coconut water entirely. “If you like the taste, great,” she says. “If you’re doing a short workout, great.”

Traditional coconut farming is relatively easy on the environment, says Severino Magat, a coconut expert and former senior scientist with the Philippines’ Department of Agriculture. Compared to other crops, coconuts require little fertilizer, and their giant root systems help prevent soil erosion. They support beneficial bacteria and fungus, which nourish the sandy beaches where they grow. Because of their thick husks, coconuts rarely require pesticides, except in the case of major infestations. (A good thing, since according to Magat, the chemicals travel “to most parts of the plant, including the nut, within 24-48 hours after application” and can remain in the plant for months.)

The main environmental cost associated with coconut water, at least in the United States, comes from shipping. Coconut water comes from young, green coconuts, sometimes called (no snickering!) tender nuts, which are grown in tropical regions all over the world. Harvested when they’re between six and eight months old, these bright green fruits bear little resemblance to their mature counterparts (the hairy, brown kind you see in the supermarket). After the water is extracted from the young fruit with a tap, it is flash pasteurized, bottled, and shipped, usually on cargo ships. Vita Coco buys its coconut water exclusively from Brazil, while Zico buys its coconuts from Latin America, Indonesia, and Asia.

Although coconuts are now ubiquitous in the tropics, they weren’t always. Botanists believe the coconut palm is probably native to Southeast Asia, but it has spread rapidly across the world through trade routes in the past two centuries. A 2009 Stanford study published in the Proceedings of the National Academy of Sciences found that seabirds don’t like to nest in coconut palms—they prefer native trees. That’s a problem, says Hillary Young, a lead researcher on the study. “Many species of seabirds are globally declining, so anything that degrades seabird habitat is a real concern.” Also, birds’ guano (poop) is an important part of island ecosystems. But “even outside of seabird habitat, new coconut plantations may have negative effects on native plant and animal communities,” writes Young in email, though she notes that the same is true of any one-crop plantation.

But even with the skyrocketing demand for coconut water, so far the major manufacturers still mostly buy from small, family-owned plantations that rely on low-impact, traditional farming methods. But were the coconut industry to scale up and industrialize, either because of demand for coconut water or other coconuts products such as oil for cooking or even biodiesel, the environmental impact would likely increase. Mike Foale, an agricultural researcher at the Australian Commonwealth and Scientific Research Organization, predicts that coconut farming in Brazil will expand rapidly in the coming years. To wit: Last year, PepsiCo bought the Brazilian company Amacoco, the country’s largest producer of coconut water. (PepsiCo also distributes O.N.E. in California and Florida. Coca-Cola, meanwhile, bought into Zico, a move that prompted one New York yoga studio chain to stop selling it. According to Beverage World, Vita Coco is the only major coconut water that has so far remained independent of either soda giant.)

The bottom line: While serious athletes are probably better off hydrating with sports drinks, coconut water’s okay for light workouts and everyday activity. That most coconut waters contain only one ingredient is a nice plus, especially considering the strange hues and artificial flavors common in sports drinks. Environmentally speaking, coconut water is actually not bad. So far. But here’s what’s not sustainable: going to seven supermarkets to find my coconut fix. I’ll try to restrain myself.