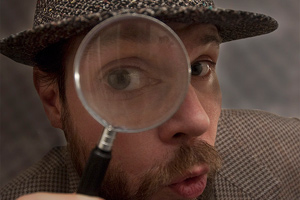 Fact checkers: the perpetually under-appreciated employees at any publication. We’re responsible for confirming the veracity of every statement the magazine publishes, both in print and online. We become resident experts in the articles slung our way, upholding our employers’s reputation for factual accuracy and serving as a first line of defense against lawsuits. See the Jared Diamond-New Yorker debacle as an example of what can happen when articles are disputed. And remember Jayson Blair? Few sing our praises (although John McPhee once did. Thanks, John). It is thankless work, with long hours and little pay.

Or, at least, that’s the job’s reputation. It’s actually wonderful work, filled with intellectual excitement. Mother Jones is supportive of us beyond measure. I’m serious. See Lori Fradkin’s piece on her time as a copy editor at New York Magazine to give a sense of the stratum in which we lie. And that’s why NBC’s digital show “FCU: Fact Checkers Unit“, premiering today with three 6-minute episodes and slated for an 8-episode run, is so disappointing. It omits the thrilling aspects of the work in order to crack a joke.

This would be tolerable if the jokes were funny. But FCU’s first episode (below), guest-starring a ghost-fearing Luke Perry, is a tired retread of lackluster “CSI” and “Paranormal Activity” parodies. Future cameos by rocker Dave Navarro and Jon Heder of Napoleon Dynamite fame give the impression that the show is merely a venue for creators Peter Karinen and Brian Sacca to tap their celebrity cadre.

And then there’s the corporate sponsorship: A joint venture between NBC-Universal and Samsung, the show “highlights the capabilities of the Samsung Galaxy S smart phone,” according to the NBC press release. “FCU” pays little heed to product placement subtlety. In the first episode, the camera pauses on a shot of the phone and prominently features its video capabilities for more than 20 seconds. Nice phone. Now where’s the funny?

“FCU” germinated from a decent pilot that premiered at Sundance in 2008, featuring Bill Murray’s pitch-perfect deadpan. The wonderfully discomforting Kristen Schaal co-starred in the pilot and her character over to the series as a regular. But the little screen time she has cannot save a show that satisfies its creators and sponsors at the expense of truly entertaining its viewers. Unless, of course, you think that Luke Perry sleep-dancing is funny, in which case I’ve got a phone for you to buy.