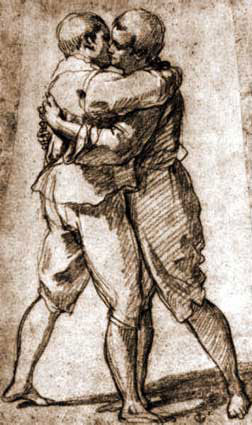 Ugandan parliament member David Bahati thinks so. The author of the East African country’s anti-gay bill told Harper’s contributing editor Jeff Sharlet that “‘If you come here [to Uganda], you’ll see homosexuals from Europe and America are luring our children into homosexuality by distributing cell phones and iPods and things like this,'” Sharlet recounts in an interview on yesterday’s “Fresh Air.” How iPods lead to same-sex relationships is beyond me save maybe constant replays of Katy Perry’s “I Kissed a Girl.” As Sharlet points out, it’s actually anti-gay hysteria that’s getting exported to Uganda, and the exporters are evangelicals from the US of A. An Advocate cover story penned by Sharlet sheds light on various anti-gay laws gaining traction throughout Africa, and the Americans that are funding them.

But let’s go back to Bahati’s suggestion that Europeans and Americans are exporting homosexuality: It’s a claim I’ve heard before from some black people, my own family included. The rumor has it that being gay is a white inclination that’s seeped its way into the black experience via colonialization. It’s largely based on the misconception that gay people don’t exist in African history. And it’s comparable to the claims made by some conservatives that gay rights, specifically gay marriage, is a fad not rooted in “traditional values” or espoused by any society in history. Which is just plain false.

After some online sleuthing, I discovered a whole lot of gayness, and gay marriages, in various cultures around the world going back centuries. (I know, I know. Appealing to tradition is a weak way to prove a point, but it is educational and pretty darn fascinating). So from the Bronze Age in China, to the eunuchs of the Roman empire, and even to the cross-dressing mugawe in Kenya, here’s a brief (but handy) timeline:

2nd Century: Roman emperor Elagabalus sends out a request for an out-of-town male athlete named Aurelius Zoticus, whom he later marries in a lavish ceremony.

342: The party is over. Christian Roman emperors Constantius II and Constans issue radical changes to marriage laws, barring same-sex unions and executing those who don’t comply.

1552: Francisco Lopez de Gomara reports in History of the Indies that men are marrying other men.

1569: Friar Gaspar de Cruz claims natural disasters in China are God’s punishment for its people’s acceptance of sodomy and same-sex marriages. (De Cruz calls this scene “a filthy abomination,” an annoyingly popular evangelical meme that’s still used today.) Turns out, homosexuality had been going on in China since the Bronze Age.

1576: History of the Province of Santa Cruz describes indigenous women in Brazil who follow the “berdache” tradition of mixing gender roles: “each has a woman to serve her, to whom she says she is married, and they treat each other and speak to each other as man and wife.” Male berdaches can also marry other men.

1600s: Poet Li Yu writes about same-sex marriage ceremonies in Fujian and southern China: “If he is a virgin, men are willing to pay a large bride-price.”

1937: Melville Herskovits, later the seminal author behind The Myth of the Negro Past, discovers that the Nuer society in Sudan recognizes woman-woman marriages, where an infertile woman divorces her husband, finds another woman to be her wife, and then finds a man to impregnate her wife. The wife’s kids consider the “female-husband” to be their father, a tradition that’s practiced by the Kikuyu and Nandi in Kenya, some Ibo and Yoruba in Nigeria, and dozens of other tribes.

1973: A British anthropologist discovers the mugawe—a religious leader of the Meru in Kenya—who cross dresses, is usually gay, and sometimes marries other men.

For more juicy info, check out this historian’s affidavit about the roots of gay marriage here (PDF).