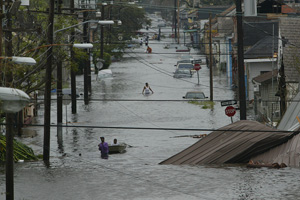 The most upsetting statement that I’d seen in the news since I’d come back to the Gulf Coast was made by a reporter who (like many others) glibly declared that three months into the Deepwater Horizon debacle, “the real difficulty” BP and the Coast Guard were experiencing was “finding any oil to clean up.” That was until last weekend, when a Washington Post article announced that, five years after Hurricane Katrina, a visitor to New Orleans “had to go looking for traces of its destruction.”

It’s true that New Orleans has come a long way since 2005. The population is up to 336,000, more than 100,000 shy of pre-Katrina numbers but still 50,000 more people than were here in 2007. Brad Pitt has indeed constructed some fabulous new houses in the 9th Ward; huge strides have been made in not just rebuilding, but reforming, the public education system; and 67 percent of residents say they’ve recovered from the storm. Though that leaves a lot of people who haven’t, it’s 8 percent more than two years ago.

But a couple of months ago, I brought one of my friends from San Francisco here to visit me—a gal who ingests a lot of news—and she could not believe the extent of the destruction she saw. It’s awfully irresponsible to say all that stuff about recovery without also mentioning that you can’t even count the blocks that are still half-full of empty, broke-down houses, or that Pitt’s 50 new houses dot an area that lost 4,000—an area people sometimes compare to Hiroshima because its torn-up roads, total lack of streetlights, and abundance of overgrown lots contribute to a vast and penetrating emptiness.

It’s also irresponsible to not mention that the triumphs in primary and secondary education coexist with an absolute tragedy in New Orleans’ colleges. The University of New Orleans is preparing for a 35 percent budget cut. In the spring, its students threw a funeral for higher education; its faculty couldn’t make copies for lack of supplies. Delgado Community College—another school attended by large numbers of minority and poor students—has had to turn applicants for the fall term away because several buildings, including the library, are still hurricane-damaged. This breakdown isn’t just preventing the city from retaining its college-bound youth, it’s costing precious dollars: A recent survey of potential investors showed that the No. 1 reason they decided to not establish businesses in the area is the lack of a qualified workforce.

Those omissions are just as inexcusable as announcing that most of BP’s oil is gone without admitting that the estimate is wild, or that the “gone” part ignores miles of oil out of sight underwater, or that even if those optimistic numbers are accurate, the remaining spill is still many times larger than the Exxon Valdez dump. Or printing that Gulf seafood is safe, without adding the caveat that the FDA’s assessment is based on eating fewer shrimp a week than you’d find in one shrimp cocktail— and without mentioning at all that no one’s testing the seafood for highly toxic dispersants.

Telling only the happy half of the story isn’t just a disservice to some abstract principle like truth or fairness; it’s a very real disservice to the people on the ground. When FEMA and the Red Cross failed to help me after I evacuated during Katrina, sympathetic doctors and well-meaning strangers and weepy mall-store managers gave me contact lenses, money, and pants because they knew how screwed I was from watching the intense and moving news coverage. It’s not clear who’s going to help the oil-spill victims—who, for the record, never got help from FEMA or the Red Cross—when the party responsible for taking care of them stops paying or doesn’t pay at all. Will they get more assistance in their long recovery than New Orleans does now, five years later?

I know. I don’t really want to have to talk about how traumatized an unemployed fisherman’s wife is, either. I want to celebrate that New Orleans is still—God bless it, maddest props to it—the historically significant and culturally rich city where you turn on your computer and one of the available wireless networks is called “plessy,” because your next-door neighbor is a descendant of Homer Plessy, as in Plessy v. Ferguson. But it is also the type of city where, several weeks ago, the Plessys ran out of their house to holler to the five squad cars’ worth of cops that had dropped to their knees and drawn their weapons in the middle of the street that the man they were pursuing went THAT way.

Seventy percent of New Orleanians say that America has forgotten about their struggle to recover from Katrina. This Sunday, President Obama’s coming to pay attention to it for a day. Last time he spoke at Xavier here, a year after the storm, he said that “lessons can be just as easily unlearned as they are learned.” Or, if the post-disaster, everything-is-fine-now headlines now coming out of the Gulf are any indication, they can also never be learned at all.