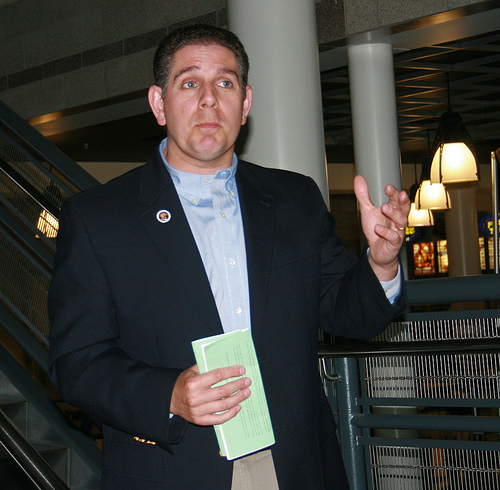 Bernero, once seen as the underdog candidate, trailed Dillon in the polls for most of his primary campaign. But recently labor groups like the AFL-CIO and AFSCME mobilized their members and ramped up their ground campaign on Bernero’s behalf, and as a result, the blunt Lansing mayor surged in the most recent polls. A fiery politician, Bernero is largely seen as a defender of the working class, especially the auto industry, and will garner even more support from Michigan’s still-influential unions heading into November.

While Bernero sounds like a classic Michigan Democrat, Rick Snyder, who easily defeated longtime Rep. Pete Hoekstra in Michigan’s GOP gubernatorial primary, is hardly your typical Republican. The former CEO of Gateway computers, Snyder trounced his more established Republican opponents, leading Hoekstra by 63,000 votes with 53 percent of precincts reporting. Like Bernero, Snyder got off to a rocky, unassuming start, but quickly gathered momentum as voters latched onto his job-creation message in a state blighted by 13 percent unemployment.

Indeed, Snyder’s business cred—he’s a former wunderkind with business and law degrees from the University of Michigan, ran Gateway, and started two venture capital firms—is the core of his platform. He’s mostly avoided questions about abortion, the tea party, or petty politics—so much so that he’s been accused of being socially liberal. (Snyder says he’s pro-life and backs the state’s man-and-woman marriage law.) As for his take on the powerful unions, he said, “I’m not anti-union or pro-union. I want to get the job done.”

Snyder’s win Tuesday night all but ends the political career of Pete Hoekstra, a fatherly figure in Michigan Republican politics. A former chairman of the House Permanent Select Committee on Intelligence, Hoekstra had led the in the polls for months, buoyed by his bike-riding campaign throughout Michigan to meet voters. But in the end, he never matched Snyder’s campaign war chest.

Looking to November, Snyder likely has the edge to replace term-limited governor Jennifer Granholm, a Democrat. Of all five GOPers in Tuesday’s primary, Snyder, a moderate Republican from liberal Ann Arbor, has polled highest in a hypothetical general election. Snyder is also incredibly popular among independents: Public Policy Polling reported that 37 percent of indies viewed him favorably while only 9 percent didn’t. Snyder, in other words, has cross-over appeal. Whether Bernero can woo those same independent voters, and at the same time grow his Democratic base, could well determine whether he tops Snyder and keeps the governor’s seat within the Democratic Party.

Wasting no time, Bernero began separating himself from businessman Snyder on Tuesday night, saying, “You know where [Snyder’s] got me beat? Wall Street… I represent Main Street.”