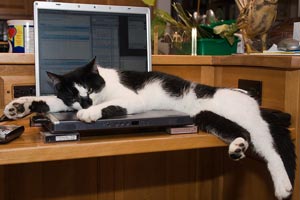 Last week, I wrote about the environmental impact of email attachments. This stirred up lots of discussion among commenters here on the Blue Marble (almost as much as the oatmeal and Greek yogurt Econundrums) and also over at Kevin Drum‘s blog, Andrew Sullivan‘s blog, and the New York Times‘ Freakonomics blog. While some of the the comments did tend toward the all-caps “you idiot” end of things, many readers made interesting points. For example, one of Sullivan’s commenters says:

I can’t say for sure (given that her source didn’t go into the details about his 17.5 kettles number), but that seems more like a lifecycle-analysis assuming the pictures are kept rather than viewed and deleted to free up memory space.  The same thinking can apply to the power use of the devices used to view the e-mails: I’m using my computer all day, so the marginal power consumption caused by receiving an e-mail with four attachments is probably negligible, and could even be negative; if I were running a program that required all of the computing power of my machine, but replaced some of that time with looking at LOLcats that my friend had sent me (without shifting the higher computer to another time), then distracting e-mails could actually prove a net power saver.

Matthew Yeager, a data storage expert who works for the UK data services and solutions company Computacenter, was my main source for the piece, and he has responded to some of the points that readers brought up in an email. Here’s a portion of it:

Yes, at first glance I agree that the context of boiling a kettle 17.4x being equivalent to emailing a 4.7mb attachment seems too fantastic to believe…as does the worldwide datacentre industry being at parity with the airlines for CO2 production with 2% of all man-made CO2 comes from computers and communications technology.

The sources for both of these statistics can be found both directly in the body of the blog post as well as below for the BBC interview.

It is important to remember that the point of the BBC piece was to discuss the ‘data deluge’ and how the creation of data is affecting our planet and, in this instance, Computacenter customers. Indeed, a recent statistic putting data growth in perspective has us creating as much data in two days as we did in all of 2003. “The real issue is user-generated content,” Schmidt said. He noted that pictures, instant messages, and tweets all add to this. (Source: Eric Schmidt, Google)

I note that in many comments (as well as the Andrew Sullivan commenter) commentators give what they believe to be well thought out arguments and related mathematical equation, however your focus remains on the server alone and does not take into account the power/cooling and related environmentals for the datacentre where the server resides, the networking equipment required to connect the server, the data storage array(s) attached to the server, et al.

It is important to take into account that the power calculations come from existing equipment and not the power to deploy them in the first place; there is much wastage at all levels of a traditionally deployed technology infrastructure of siloed storage, servers, networks, et al which can be calculated largely from the product datasheets as well as physical measurement such as that conducted and verified by the Digital Power Group [citation above].

Equally, a traditional datacentre can further complicate and exacerbate power issues…only 30% of the power entering a datacentre is actually spent powering the computer chips, whilst 70% of the energy is spent cooling the processors and removing the heat they produce with better than 99.9% of energy entering a microprocessor turned into heat. (Source: Bruno Michel, manager of advanced thermal packaging at IBM Zurich Research Laboratories.)

Hence we must also factor in the physical inefficiencies of the datacentre and the equipment therein to arrive at the 17.4x kettle boil statistic.

In my experience of working with hundreds of customers worldwide, it is not uncommon to find datacentres which have been incorrectly laid out [e.g. hot rows, cool rows] as well as ageing datacentre equipment which take up more power as well as require more power and cooling to service than that which you reference.

I’ve asked Yeager whether a PDF of the Digital Power Group study is available; I’ll post it later if it turns up.

OK commenters, go nuts! (Respectfully nuts, that is, of course.)