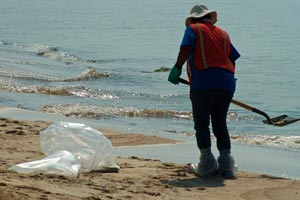 Earlier this month, the federal government claimed that three-quarters of the oil in the Gulf had magically disappeared. But as I reported Wednesday, the federal government has so far refused to provide congressional investigators and the media with the numbers to support that claim. Now, it looks like the official report, with all the data and substantiating material, won’t be released for months.

On Wednesday afternoon, during a telephone briefing on the spill for congressional staffers, NOAA scientists said the data might not be available for at least two months. The full report is in the “process of being written,” according to NOAA, but it won’t be made available for “around a couple months.” The delay, NOAA representatives said, is so the report “can be peer reviewed.”

This, of course, raises the question of why the initial report was even released on Aug. 4 if it hadn’t been peer reviewed and couldn’t be substantiated with data, methodology, and full disclosure of the kind of assumptions that went into reaching this conclusion. The explanation of why the report was released by the National Incident Command and touted by administration officials seemed to indicate that the White House may have jumped the gun on releasing the initial report before the entire documentation was available.*

From what NOAA indicated to congressional staffers, we’re not going to know for a while what the final report actually looks like or how accurate that first one even was. So is the government operating under the assumption that “most” of the oil is gone? And what does that mean for how they’re handling the response–everything from cleaning up the oil itself to evaluating the safety of seafood?

Perhaps even more concerning, did members of the Obama administration, in their effort to declare “mission accomplished” and finally get some good news out of the Gulf, create more problems than they solved? I mean, they got their New York Times headline, so at least we can say their PR mission was accomplished. But the rush to put out a report they still can’t substantiate should raise red flags galore.

* Sentence has been updated for clarity.