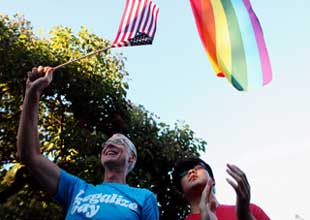 It’s kind of a banner week for queers, what with the overturning of Proposition 8. But what exactly is going to happen next? Meet Paul M. Smith, a lawyer who sits on the board of directors of the Lambda Legal Defense and Education Fund, an LGBT and HIV/AIDS rights organization, and the recipient of this year’s Thurgood Marshall Award, a prestigious honor from the American Bar Association. I talked with him about how the Prop 8 decision could go horribly wrong, some other promising possibilities for landmark LGBT cases even if it does, and why you can thank him for the right to have gay sex in your own home.

MM: The Thurgood Marshall recognizes “long-term contributions by members of the legal profession to the advancements of civil rights and civil liberties and human rights in the United States.” So you’ve obviously been working your ass off. Is there anything you think that particularly attracted this honor?

PS: I think it’s fair to say that the Bar Association wanted to recognize somebody on behalf of the gay rights movement, because there hasn’t been such a person yet winning this award. And I’m going to certainly accept it on behalf of a lot of people who have worked very hard in that area over the years. I’ve also done a fair amount of work on free speech over the Internet and more recently free speech for video-gamers, and voting rights.

MM: Tell me more about Lawrence vs. Texas, a Supreme Court case you argued and won.

PS: There were these things called sodomy laws, under which even if you were in your private home with your partner you could be arrested and taken to jail for having sex. And these were not very often enforced directly, but more often were used as a basis for oppression of people indirectly. So they would take your children away if you got into a divorce situation and they found out that you were having gay sex. Or they’d fire you from a job if they found out you were breaking the law by having a partner. And then there was a case back in the ’80s called Bowers vs. Hardwick, which upheld the constitutionality of sodomy laws, and it basically was used to justify all sorts of forms of discrimination against LGBT people.

There was a long effort made to chip away at sodomy laws in the state courts, and then finally the perfect case came along in Lawrence, which was two guys dragged off to jail in the middle of the night out of their home—out of one of their homes—and arrested and prosecuted. And so we worked with Lambda Legal to take it to the Supreme Court and fortunately the court did a good job. Those laws were gone, and there’s now all this wonderful legal reasoning about how same-sex relationships are worthy of respect, and function the same way in people’s lives as heterosexual marriages. And this in many ways was the foundation on which a lot of the progress on marriage issues has proceeded since.

MM: So no one has been prosecuted under sodomy laws since that case?

PS: Well, not for anything like private, consensual sodomy. I mean, if you get arrested in public that’d be one thing. But in terms of those sodomy laws, they’ve all been held unconstitutional across the board, across the country, because of the one case.

MM: There are a couple of things that I think are really interesting about Lambda. One is that there’s this strategy of not just waging campaigns in actual, literal courtrooms but also in what they refer to as “the court of public opinion.” And it seems like the latter could have hefty influence on the former.

PS: Right. These are two efforts that are very often closely coordinated together. So, for example, in Iowa, where we were in the process of winning the big marriage victory there, when the Iowa Supreme Court unanimously ruled there’s a state constitutional right in Iowa to same-sex marriage, there was a huge education effort to kind of make sure that the population of Iowa reacted in a relatively positive way and they didn’t try to overturn it, as occurred in California.

MM: What’s your reaction to Prop 8 being declared unconstitutional?

PS: It was expected that that’s where the judge was going based on the questioning of the arguments. And I would say that he did a really fine job of writing up the reasoning and the factual underpinnings of his decision. It really is a very strong foundation for going up on appeal, and it’s actually quite a good case to be citing in a lot of other cases. It really is about as good as it could be from the point of view of those who think Prop 8 should be held unconstitutional.

This case says that Proposition 8 violates the federal constitution. And the reason that’s significant is that the other marriage cases, from Massachusetts to Iowa to Connecticut, Vermont, those were all cases brought against state constitutions, which meant that the states had the final say on what the law was and you couldn’t take the case to the US Supreme Court. But this case is a federal case, which means they’re saying everyone in the United States has a federal right to choose a same-sex spouse. And so the case could go to the US Supreme Court, and you might have national marriage rights across the board.

MM: Are you hopeful for that outcome?

PS: Well, I worry that it’s a risky way to go, because there’s obviously a big upside and big downside. But we’re all working to help it be litigated as practically as possible.

The first issue’s going to be whether or not it’s stayed pending appeal, which is to say, will there be weddings going on in a week or whether the whole thing will be put on ice while the appeals go forward. If the judge decides not to stay it, there will be immediate requests for a stay from the court of appeals and ultimately, if necessary, the Supreme Court, so that’s what’s going to get fought out in the next few days. And then they’ll file a notice of appeal, and that process takes its own sweet time, particularly in the 9th Circuit out here.

MM: When you say “sweet time…”

PS: It’ll take at least a year. Could be two years. And then another issue is, if people are getting married, and it reverses, what happens to all those marriages? It’s a little like what happened with Proposition 8, but they avoided those issues by interpreting it as not being retroactive. In this situation, it would be very messy. You’d have to figure out whether marriages that occur because of an erroneous decision are still in effect. That’s complicated legally—and obviously difficult emotionally for people. I think there are fairly solid arguments for staying it, but it remains to be seen what will happen.

MM: And you’re working on another case, in Massachusetts, that’s challenging a provision of the Defense of Marriage Act that says the federal government won’t recognize gay marriage even if a state does.

PS: I’m working with the lawyers in Boston on it, and it was just held unconstitutional by the Federal District Court up there. So that case could also go to the Supreme Court. We’re gonna have an appeal start very soon. It’s quite a different issue: This is about people who are already married having rights to Social Security and joint filing of tax returns and that sort of thing.

MM: And one of these cases going to or winning or losing in the Supreme Court doesn’t preclude the other doing so.

PS: No, they don’t. You could win in one and lose in the other. I could certainly imagine a world in which we could win in our case, and have the courts say, “If a state has decided to marry them, then the federal government has nothing to say about it—they should treat them as married,” but not say, “You have to marry people who wanna marry,” which is what the Prop 8 case is about. Or, if Prop 8 were to be confirmed, then our case would be kind of easy. A lot of good things are happening. But we’ll just have to wait and see what happens on appeal.