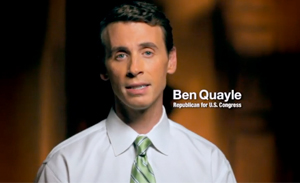 OK, maybe after the first year and a half of Barack Obama’s tenure, and after death panels and tea parties, America was prepared for the likes of the birthers, the Tenthers, the Fourteenthers, Sharron Angle, and Rand Paul.

But no one expects a Quayle rehabilitation.

And yet Ben Quayle is running for Congress. In Arizona. On a platform of “I don’t like Barack Obama” (At least he didn’t say “Barack HUSSEIN Obama”):

Ben, 34, is the privileged child of the privileged former vice president and simple mind Dan Quayle. Dan Quayle is one of the worst, dumbest, most disastrous vice presidential picks ever, according to Time, the Guardian, Esquire, Murphy Brown, and most folks who are old enough to actually remember the 1980s and ’90s. (As MoJo pointed out in 2002, Quayle the elder can also count 9/11 and racial insensitivity among the many things he doesn’t understand.)

All of Dan Quayle’s foibles and fumbles while a heartbeat away from the Oval Office also served to distract from one plain truth: In 1969, as he became draft-eligible, Quayle had his wealthy grandfather call up a National Guard general he knew to get some strings pulled and keep Quayle out of Vietnam. Quayle served in the Indiana National Guard. In 1975, when the US withdrew from Vietnam, Quayle suddenly left the Guard.

But what of the son, you ask? Should he have to atone for his father’s sins?

When you’re campaigning on the assumption that Barack Obama’s 567 days of tenure so far make him the worst executive officeholder in US history, and your father is a (painful) part of the nation’s executive history…well, what do you think, MoJo reader?

By the by, Ben Quayle isn’t exactly bereft of baggage himself. The sudden bastion of Arizonan civic duty has never voted in a local election. He has, however, written extensively about “chasing chicks” under a porn-name pseudonym for the website TheDirty.com. Back in February, about the best thing a Phoenix newpaper could say about Ben Quayle was: “As far as we know, Quayle’s never used an infant as a prop,” a stunt once employed by his predecessor in the Arizona 3rd District.

This is really a weird election year.