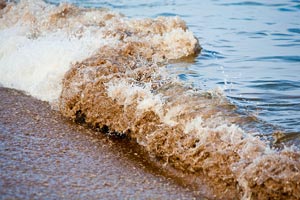 The federal government is facing mounting criticism over the oil budget report released on August 4 that has been characterized as painting an overly rosy picture of the situation in the Gulf. The National Oceanic and Atmospheric Administration has defended its release and claimed that the document was in fact reviewed by outside experts. But was it?

“The report and the calculations that went into it were reviewed by independent scientists,” NOAA administrator Jane Lubchenco told reporters Thursday, indicating that those independent experts were listed at the end of the report. Yet the scientists listed as consultants (at least the ones that I have been able to contact; will update as I am able reach more of them) have said that they did not review the final five-page document before it was released earlier this month.

“I didn’t review the final product,” said Alan Allen, who runs the Washington state-based oil spill consulting firm Spiltec. Allen says he gave input on controlled burns and how they would affect the amount of oil, but did not see the final report before it was released.

Ed Overton, a professor emeritus of environmental sciences at Louisiana State University, balked at the idea that the document had been peer reviewed. “To a scientist, peer review means something,” he said. “Clearly it wasn’t a peer review from a scientific perspective.”

In early June, Overton says, he was asked to give his opinion on how this particular type of oil would degrade or evaporate. The report, he said, was supposed to be an estimate, not an exact calculation. “It was to try to tell the Incident Command where we thought the oil could go,” Overton told Mother Jones. “It was not an oil budget for scientific purposes.” The report was pulled together by experts, he said, and is an “educated guess,” but should not be seen as an exact calculation.

Though Overton said he thinks the estimates are fairly accurate, he also said that the report was overly specific for an estimate; it makes claims like 24 percent of the oil was dispersed. “If you say 24, you are implying that it’s 24—you know it’s not 25, and it’s not 23,” said Overton.

Administration officials had indicated, however, that the document had undergone thorough scientific review by outside experts. White House climate and energy adviser Carol Browner said that the report had “been subjected to a scientific protocol, which means you peer review, peer review and peer review.” Lubchenco also stated that there had been “peer review of the calculations that went into this by both other federal and non-federal scientists.”

Dan Froomkin beat me to the punch on this one. He got even more of the experts listed at the end of the report on the horn to confirm the same thing: They hadn’t seen the final document, either. And some of them disagreed with the report’s conclusions as well.

NOAA has defended the report’s release, even as the agency has been under fire for not providing the substantiating data. Now it looks like it will be months before anyone has the data or the final report in hand to actually evaluate its accuracy.

UPDATE: Ron Goodman of the oil spill consulting firm Innovative Ventures, another outside expert listed on the report, confirms that he also did not review the final product. And a spokesperson for ExxonMobil told Mother Jones that Tom Coolbaugh, who was also listed as an independent contributor, played a “very minor roll” in the report. The spokesperson classified his contribution as a single, “one-line email.” Two experts from Environment Canada (their equivalent of the EPA) listed in the report, Ali Khelifa and Pat Lambert, were also not asked to review the final document. “Neither Environment Canada scientist saw the report before it was made public on August 4, 2010,” said the agency in a statement to Mother Jones.