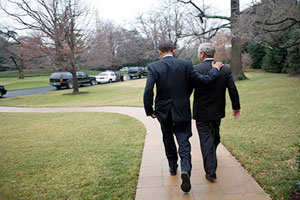 This article has been updated since it was originally published.

One major revelation to come out of Bob Woodward’s new book, “The Obama Wars,” is the news that “many Westerners, including some U.S. passport holders,” were killed by a CIA-operated drone strike in Pakistan in November 2008. It remains unclear whether the victims were specifically targeted or collateral damage. (See the Washington Post‘s Jeff Stein for more.)

If Bush was having Americans killed in Pakistan in 2008, then it’s not surprising that President Barack Obama is ordering the CIA to kill American cleric and accused terrorist Anwar Al-Awlaki in Yemen in 2010, right? Not really—the cases are pretty different. From Woodward’s account, it seems clear that the Bush administration was sincerely worried about the potential legal ramifications of killing Americans abroad—”the CIA would not reveal the particulars [of the attack] due to the implications under American law.”

Much has changed since the Bush administration left office. Two years ago, the CIA was worrying about legal issues surrounding the killing of Americans at an alleged terrorist training camp in Pakistan. Now the Obama administration has apparently put American citizens on a “targeted killing” list.

The drone strikes described in Woodward’s book aren’t even the first example of the Bush administration worrying about the propriety of something the Obama administration seems comfortable with. Kamal Derwish (aka Ahmed Hijazi), a US citizen and alleged terrorist, was killed by a missile strike in Yemen in November 2002. At the time, US officials were quick to emphasize to reporters that Derwish was not the target of the attack.

By contrast, the Obama administration makes no bones about targeting Al-Awlaki or other US citizens. Dennis Blair, the former Director of National Intelligence, admitted that citizens are targeted for killing in a public congressional hearing in January. On Friday, the government responded to a lawsuit intended to obtain an injunction against killing Al-Awlaki without due process. The lawsuit, which was brought by the American Civil Liberties Union and the Center for Constitutional Rights on behalf of Al-Awlaki’s father, Nasser, has little chance of success.

It its 60-page response [PDF] to the ACLU/CCR suit, the Obama administration argued that Al-Awlaki’s father doesn’t have the right to sue on his son’s behalf. Nasser Al-Awlaki’s lawsuit, the government argues, is based on the idea that Anwar Al-Awlaki “cannot access legal assistance or a court without risking his life.” That “is not supported by any evidence,” the government says. Then Obama, CIA director Leon Panetta, and Secretary of Defense Robert Gates make what at first glance appears to be a promise:

if Anwar al-Aulaqi were to surrender or otherwise present himself to the proper authorities in a peaceful and appropriate manner, legal principles with which the United States has traditionally and uniformly complied would prohibit using lethal force or other violence against him in such circumstances. 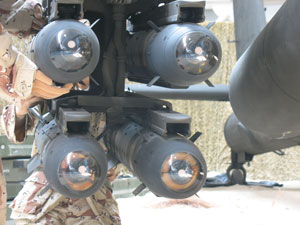 This is what death looks like. | Flickr/hoyasmeg (Creative Commons).You might not be able to tell through the legalese, but this isn’t quite a promise not to kill Anwar Al-Awlaki if he turns himself in. (He’s already said he doesn’t intend to do so.) Instead, it’s a lawyerly statement that “Legal principles with which the US has traditionally and uniformly complied” would prohibit killing Awlaki if he does so. But until recently, the US didn’t put its own citizens on targeted killing lists. If the US hasn’t stuck to the legal principle of not killing people without trial, why should Al-Awlaki have any confidence that it will stick to the principle of not vaporizing him if he tries to turn himself in?

Still, the government makes a fairly compelling argument that there’s no evidence that Anwar Al-Awlaki even wants this suit filed. That will make it very hard for Nasser Al-Awlaki and his ACLU and CCR lawyers to convince a court that they have the right to sue on Anwar’s behalf.

Even if the lawsuit can clear the hurdle of establishing a right to sue, the Obama administration has erected other ones. They argue that picking targets in an “armed conflict” is a “political question” that the courts should stay out of (even though it’s hard to argue that Yemen’s a “battlefield”). The government asserts that ruling in favor of Al-Awlaki would unconstitutionally restrain the actions of presidents in future conflicts.

At the end of its sixty page brief, as expected, the Obama administration brings out the big guns, its get-out-of-court-free card: the so-called “State Secrets” privilege. That, at least, is something the Bush administration could get on board with. During the Bush years, Justice Department lawyers repeatedly invoked the privilege to force courts to throw out lawsuits challenging Bush’s counterterrorism policies, including “enhanced interrogation” and widespread surveillance of Americans. The Obama administration has continued that practice.

The array of arguments the Obama administration can bring to bear against the ACLU/CCR lawsuit is yet another indicator of the uphill battle the plaintiffs face in the courts. The truth is, since 9/11, even the liberal Ninth Circuit Court of Appeals has shown great deference to executive branch assertions of power. It’s hard to think of a greater power to give the president that the ability to order the summary execution of citizens who are determined to be enemies of the state. The Obama administration has now argued that it has that power—and that it doesn’t even have to prove to a court that the person in question is guilty (or is even the person the administration says he is).

As the Jeppesen Dataplan case recently proved, when it comes to “State Secrets,” the executive branch’s power is functionally limitless. The government really can monitor your phone calls, kidnap you, send you to other countries to be tortured (or torture you itself), and even vaporize you with a Hellfire missile. There’s nothing you or the courts can do about it. The only protection you have is the goodwill of the man in charge. Right now that’s Barack Obama (you might like him, but you have no way of predicting who it will be in the future). Better not piss him off.