If you read RL Miller’s post on “climate zombies” you know that open climate denialism is back in vogue in the GOP. However muted denialism may have gotten in the late 2000s, it has come roaring back—like everything reactionary—with the economic downturn. This is from Gallup:

For the most part the American public’s feelings on climate change are shallow, sloshing around with the economic and political tides. When people are feeling safer and more prosperous, climate scientists will magically become more persuasive.

As for the professional skeptics and culture warriors, there’s little point hashing out the same arguments with them again and again. I have long since abandoned it. Many people do it well and G*d bless them but I’ve had my fill of sunspots and medieval warming periods and Pacific Decadal Oscillations. Ideological trench warfare is wearisome and there are many other issues in dire need of attention, principally how we’re going to respond to climate change. That’s a conversation that engages people outside the armed camps.

However! It does seem to me that the right’s climate denialism hasn’t been properly linked to the larger phenomenon of epistemic closure on the right. When Jim Manzi, everyone’s favorite sensible conservative, criticized fellow conservative Mark Levin for peddling intellectually shoddy skeptic arguments in his bestselling book Liberty and Tyranny, Levin went nuts, joined by a half-dozen other NRO writers. How could they not? The very same skeptic talking points in Levin’s book appear in thousands of blogs and comment sections across the interwebs. If they are intellectually bankrupt, a whole lot of people are going to look stupid.

Regardless, to restrict discussion to climate science—how many scientists say what, who signed what statement, how many peer-reviewed papers say what—misses the forest for the trees. Climate denialism is part of something much broader and scarier on the right. The core idea is most clearly expressed by Rush Limbaugh:

The Four Corners of Deceit: Government, academia, science, and media. Those institutions are now corrupt and exist by virtue of deceit. That’s how they promulgate themselves; it is how they prosper.

The right’s project over the last 30 years has been to dismantle the post-war liberal consensus by undermining trust in society’s leading institutions. Experts are made elites; their presumption of expertise becomes self-damning. They think they’re better than you. They talk down to you. They don’t respect people like us, real Americans. Here’s Americans’ trust in institutions, also from Gallup data (click for larger version):

Of course the decline of trust in institutions is multi-causal, but the right’s relentless assault has certainly exacerbated matters. Here’s another graph to chill your blood, showing the only two institutions in which trust is rising: 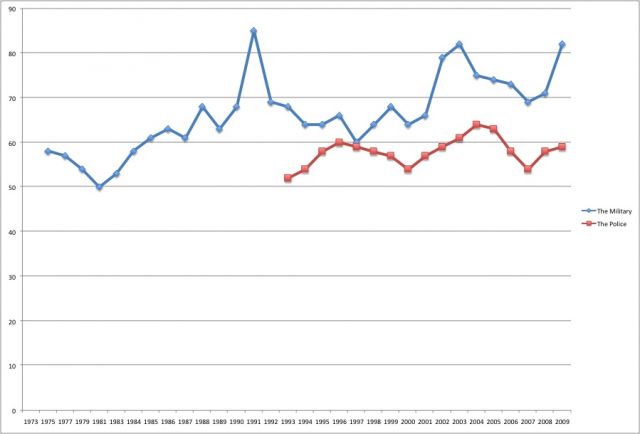 (I was tipped off to these graphs by Chris Hayes, who has written about America’s institutional crisis and is working on a book on the subject, which I expect will be one of the big political books of 2011.)

The decline in trust in institutions has generated fear and uncertainty, to which people generally respond by placing their trust in protective authorities. And some subset of people respond with tribalism, nationalism, and xenophobia. The right stokes and exploits modern anxiety relentlessly, but that’s not all they do. They also offer a space to huddle in safety among the like-minded. The conservative movement in America has created a self-contained, hermetically sealed epistemological reality—a closed-loop system of cable news, talk radio, and email forwards—designed not just as a source of alternative facts but as an identity. That’s why when you question climate skepticism you catch hell. You’re messing with who people are.

Consider what the Limbaugh/Morano crowd is saying about climate: not only that that the world’s scientists and scientific institutions are systematically wrong, but that they are purposefully perpetrating a deception. Virtually all the world’s governments, scientific academies, and media are either in on it or duped by it. The only ones who have pierced the veil and seen the truth are American movement conservatives, the ones who found death panels in the healthcare bill.

It’s a species of theater, repeated so often people have become inured, but if you take it seriously it’s an extraordinary charge. For one thing, if it’s true that the world’s scientists are capable of deception and collusion on this scale, a lot more than climate change is in doubt. These same institutions have told us what we know about health and disease, species and ecosystems, energy and biochemistry. If they are corrupt, we have to consider whether any of the knowledge they’ve generated is trustworthy. We could be operating our medical facilities, economies, and technologies on faulty theories. We might not know anything! Here we are hip-deep in postmodernism and it came from the right, not the left academics they hate.

Scientific claims are now subject to ideological disputation. Rush Limbaugh is telling millions of people that they’ve taken the red pill and everything they once knew and could trust is a lie. They’ve woken up outside the Matrix and he is their corpulent, drug-addicted, thrice-divorced Morpheus. What could go wrong?

This story was produced by Grist as part of the Climate Desk collaboration.