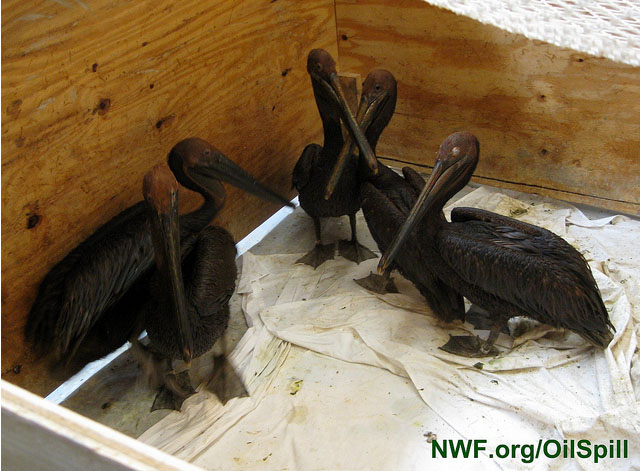 The US Fish and Wildlife Service announced on Wednesday that it will be posting regular updates on the species of birds that have died as a result of the Gulf oil spill. Conservation groups have sought this information in the months since the spill, but previous reports from federal government biologists have only tallied the total number of birds—they haven’t provided a species-by-species break down.

This information is crucial to determining the true extent of the ecological damage caused by the spill, argue groups like the National Wildlife Federation, which filed a Freedom of Information Act request to obtain the detailed reports last month. There are some birds that conservationists are more worried about in the region—birds like the brown pelican, which was just taken off the endangered species list last year, and the piping plover, which is currently on the list.

The first detailed tally shows that 568 brown pelicans have been collected, 376 of them dead. The only bird with a higher tally is the laughing gull, of which 1,885 have been brought in, 1,591 of them dead. In a bit of good news, only one piping plover has been found dead so far, according to yesterday’s tally.

Yesterday’s release only includes the species count for 4,676 birds, which is less than the total brought in so far. The last report from the Deepwater Horizon Response stated that 8,009 birds had been collected so far. Georgia Parham, a spokesman for the Fish and Wildlife Service, said there is some delay in releasing the more detailed reports, as it takes time to verify the species. The agency expects to release new updates on the confirmed species count every Wednesday, said Parham.

The species figures are crucial to the Natural Resource Damage Assessment process, which the government is conducting now to determine how much the spill damaged the gulf—and how much BP will have pay. “Ensuring accurate, scientifically valid information that describes bird impacts from this incident will be an important part of the government’s overall Natural Resource Damage Assessment,” the agency said on Wednesday.