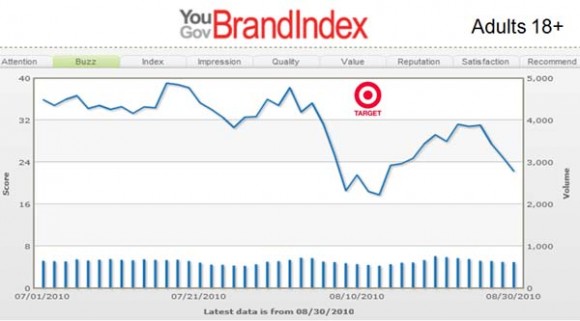 There are signs that Target is still suffering from the public relations disaster that followed its donation to Republican Tom Emmer, the Minnesota gubernatorial candidate—a contribution made possible by the Citizens United Supreme Court ruling. The Minnesota Independent flags a study from Brandweek, a marketing industry trade magazine, which shows that the retail giant’s reputation took a big hit in early August and hasn’t recovered since. Progressive activists railed against Target after discovering that the LGBT-friendly company funneled money to Emmer, a right-wing social conservative. Brandweek says the campaign seems to have succeeded in dampening consumer perception of Target’s brand, citing its scores based on a “BrandIndex Report” that calculates “positive and negative perceptions of a brand.”

Such findings might give corporations pause about openly pouring cash into campaigns. But that will partly depend on whether this kind of backlash has a lasting impact and whether watchdog groups will be as reactive the next time around.