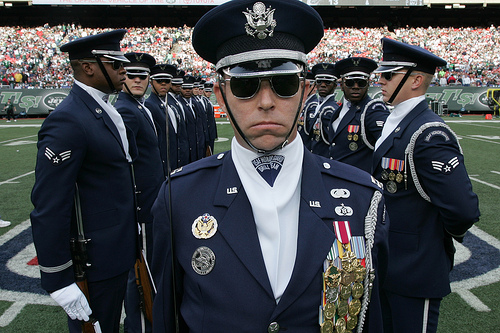 The US Air Force announced earlier this month that it had finally adopted a new motto: “Aim high…fly-fight-win!” This simple slogan of five monosyllabic words took nine months of research and development by a crack team that included a lead scientist, two generals, a colonel, and the service’s top enlisted man, who surveyed airmen and vets around the world. I had to check and make sure that Major Major Major Major wasn’t a member of the Air Force’s “motto team,” because its work sounds like a scene straight out of Catch-22:

When the Air Force motto team embarked on the project, they committed to Airmen buy-in in an inclusive, well-researched effort, rooted in Air Force culture and identity...

“We took the time to try to get this right,” General Schwartz said. “A service motto belongs to those who serve, and we’ve done our best to give voice to how Airmen feel about serving this nation…

After understanding the shared identity, the motto team began transforming words and concepts into a unifying, enduring and credible motto, said Lt. Col. Clark Groves, lead scientist for the project.

“The research team held more meetings with nearly 250 Airmen on bases in each major command, discussing scores of identifying words and concepts tied to the core Airman identity,” he explained. “These discussions, information from Air Force historical archives and input from total force Airmen, Air Force civilians, retired Airmen, and the public provided the basis for identifying the ideal motto candidates.”

This took nine months of R&D? Anyone who was alive in the ’80s will remember the “aim high” recruiting tagline. And Schwartz, the Air Force’s big cheese, has been using the “fly-fight-win” motto in pep talks since at least 2008. Why, I don’t know. It’s an eminently vapid mission statement, like a football team adopting the creed “Score more points.”

The Air Force does want you to know, however, that its new motto is not just a new recruiting gimmick:

The chief noted an important distinction between slogans and mottos.

“Slogans and ad phrases come and go, but a motto is meant to be passed from one generation of Airmen to another,” Chief Roy said. “This is for the hundreds of thousands of Airmen who now serve, who have served, and who will serve in the future.”

I put a call in to the Air Force’s Pentagon-based public affairs office to find out how much this motto business cost. They didn’t know offhand and promised to get back to me—even though the office’s top staffer, Col. Les Kodlick, was on the motto team. Whatever the price tag, it was probably significantly more than it took in 1883 for the Marine Corps to come up with its unforgettable (and weightier) motto, “Semper fidelis.” Or more than it took the Navy—oh, wait, that’s right, the Navy doesn’t have an official motto. Guess it’s been saving its dollars for torpedoes and stuff.