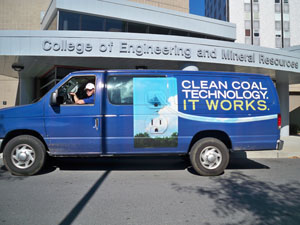 The American Coalition for Clean Coal Electricity, an astroturf front for a group of big coal, railroads and power companies, is on tour with a 42-foot “mobile classroom” bus. The bus is mostly traveling in coal communities throughout West Virginia, Kentucky and Indiana, wending its way through university campuses and community gatherings.

The bus features exhibits demonstrating why coal is getting cleaner and reminds the locals that moving towards clean coal preserves jobs. Scientific proof of coal’s cleanliness comes in the form of a video interview with Dr. David Bayless, director of the industry-sponsored Ohio Coal Research Center.

The bus isn’t the first of ACCCE’s educational campaigns. Last year, the coalition targeted kids with coloring books that featured lumps of coal getting “clean” in the shower, and then ended the year with little coal Christmas carolers.