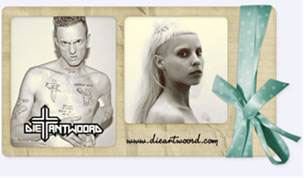 Prior to February, Afrikaner “zef” rappers Die Antwoord were virtually unknown outside of South Africa. Then, practically overnight, their video for “Enter the Ninja” became an internet sensation (nearly 8 million YouTube views to date), launching a bidding war by major labels. The most common reaction to the video may well have been, What the fok? (Read my initial reaction here.) Bumping a South African ghetto style known as zef—which is sort of like a downscale version of “bling”—rappers Ninja and Yo-Landi Vi$$er have created an insanely weird, high-energy chemistry. They push the creative envelope with an absurdist gangsta sexuality, laden with heavy doses of profane slang in their native tongue.

Die Antwoord arrives in America next week to tour in support of $O$ (SOS), their new debut CD on Interscope, which, fittingly, is also home to Lady Gaga and Eminem. Just yesterday, Die Antwoord released the video for their song “Evil Boy.” Watch it below, but make sure your boss isn’t looking, because it may well be one of the most risqué music videos ever recorded. This morning, I spoke with Ninja, who was chilling with Yo-Landi at a friend’s place in Johannesburg prior to the tour. In part one, we talk about Die Antwoord’s roller-coaster ride, the Interscope deal, and the surprising story behind “Evil Boy.” (Click here for part two of the interview.) Watch the video first, and then we’ll go speak with Ninja.

Ninja: Ja, you said it so good! It’s the best American pronunciation of it ever!

MJ: So Interscope lets you do whatever you want?

N: Yeah, we wrote it in the contract. Otherwise we can’t do this.

MJ: So how did they woo you? You had, what, EMI and Interscope bidding for you?

N: All five of the big guys, actually.

MJ: What did they do to attract you?

N: They just take you to fancy restaurants and give you, like, foot massages. No, they just spoil the shit out of you and be very nice. Then they tell you you can do anything you want if you sign with us. And we believed Interscope; we weren’t sure if we believed everyone else.

MJ: Did they, like, have their artists calling you to talk about the label?

N: No. All the shit just went crazy in February, and we got like 5,000 emails in our inbox. Among them was an email from Interscope. I didn’t know what it was, Interscope, at the time. Then I looked at the bottom there was a Dr. Dre CD, and a Tupac CD, and a Snoop Dog CD, and there was the little Interscope logo there. And then they got my personal telephone number and for some God-known reason they phoned us from Los Angeles, and I said Jesus, guys! And then also EMI wanted us, and also Sony—everyone, all in about three days or something!

MJ: Let’s talk about “Evil Boy.” Who came up with the idea for Yo-Landi’s suit made of white rats?

N: Yo-Landi loves rats. She had 13 rats when we started the “Evil Boy” video, but then she put the boys and the girls together, and a lot of the girls got, like, raped. So now there’s 23 rats in the posse. And Yo-Landi wanted… I thought it would be quite cool to have, like, a coat made out of rat fur, but we thought that was a little bit gross, like dead rats is not that cool. And then we thought maybe like a coat made out of toy rats. And so these girls, Gabby and Lauren, helped me sew it up and make it. We worked on whether it should be a long coat or a short coat, and how many rats it should it have on it and how big should the rats be. And then I drew a picture of a toy rat, and I was like, “Make it like this.” Because we wanted the whole video to be like a cartoon, but a real-life cartoon, so we like the rats to look more like a comic book. The idea I had was to make a comic book move. That sort of style.

MJ: Did you create the little Evil Boy character?

MJ: And you had it tattooed on you?

MJ: So the “Evil Boy” video is a cartoon with a lot of penises in it!

MJ: That’s gonna get some attention, no doubt…

N: It’s just kind of the theme of the song.

MJ: ‘Cuz we haven’t seen that in a music video yet.

N: We didn’t really think about that. We just kind of ran with the theme.

MJ: Now someone who doesn’t know the backstory of “Evil Boy” might interpret what the boy says as anti-gay. Can you explain what he’s talking about?

N: It’s quite funny, because we’ve known Wanga—that’s the rapper—since he was a little kid, 13 or so. He’s like 18 or 19 now. He’s a Xhosa kid. We made “Evil Boy” because of the story Wanga told us. Wanga is kind of like a street kid. He went away from the ghettos because the ghettos get fucked up in South Africa. The kids turn 13 and shit, and they start joining gangs. I mean, they don’t have to, but it’s like, all around all the time.

So he moved to the city area, and kind of squatted on this farm. Cape Town is a weird town. There’s a mountain, and the sea, and a little city tucked into the side of the mountain. So up on the side of the mountain is this little farm. We always used to go there because it was a strange place to hang out. And one day Wanga told us he has to go to the bush. A Xhosa kid, when you turn a certain age—18 or 19—you have to go to the bush to “become a man.” And they circumcise you with a big knife, a kitchen knife. But you go in a blanket. And you have to stay in the bush for one week, where they cut your foreskin off with no disinfectant, no painkiller. And they get the white ash from a fire and rub that on the penis to stop the blood or whatever, and they also put the ash on the face. So you’ll see these guys in blankets with a white face and a funny look on their faces because they just had their foreskins chopped off with a kitchen knife with no disinfectant or painkiller.

And so we’re just chatting and talking shit, and Wanga was teaching us how to speak Xhosa. The worst word you can say in that language is umnqunduwakho [pronounced moon-dwako]. I don’t know how it’s spelled. It’s on our Facebook page. I’m gonna tattoo it on myself so I don’t forget. If you say that, it’s like the worst swear word—the unsaid word. It means, like, your bum hole, and it’s a heavy insult. You know in Lord of the Rings, when you say “Mordor,” people get freaked out and say you shouldn’t say that word. Well the Xhosas are freaked out about umnqunduwakho. So we’re joking around, and I’m like, “You should rap about this shit.”

And then Wanga saw the tattoo on my arm, and he said, “You know what, I don’t want to be a man. I think I want to stay evil boy for life.” And we thought that was fokken funny. I said, if you kick a rap about that, you should say “umnqunduwakho” in the opening line. And Wanga started laughing until he nearly peed in his pants. And that rap now is making sooooooo much noise in South Africa. It’s like, fokken freak mode! It’s quite hard-hitting, Wanga’s verse.

Now the thing is, about those men you have to go to the bush with. Xhosa culture is un-fokking-believeably homophobic. They like, do not dig gays—with the volume up! So Wanga thought it was funny that they then take a 19-year-old’s penis in their hand and cut their foreskin off with a kitchen knife. So Wanga made a joke: “Don’t touch my penis. I’m not a gay.” It’s basically like the most severe taunt you can throw at a Xhosa man. So that’s where that line comes from. Like, whatever. Like DJ Fishsticks, who’s done our remix. He’s gay and nobody really cares. South Park taught us that “gay” and “faggot” don’t mean a homosexual person. It’s somebody who rides on a Harley-Davidson motorbike and revs it really loud.