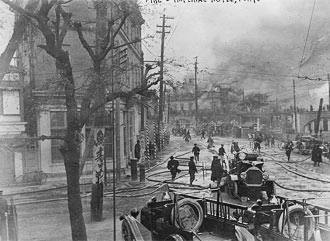 In 1923, famed architect Frank Lloyd Wright completed one of his most ambitious projects to date: The glamorous Imperial Hotel in Tokyo, Japan. Months later, a magnitude 8.3 earthquake hit Tokyo and the neighboring industrial city of Yokohama, leveling much of their business and manufacturing centers and killing an estimated 100,000 people in the process. Newspapers initially reported that Wright’s hotel was among the countless buildings destroyed by the quake. Then Wright received this telegram from hotel president Baron Okura: “Hotel stands undamaged as a monument to your genius.”

The Imperial Hotel survived, at least in part, because Wright had built it with a shallow foundation designed to “float” on the soft mud below. This minimized the influence the shaking ground had on the building. Wright’s design exploited the idea that systems as a whole are better at withstanding shocks and adapting to changes when their individual parts—call them modules—are largely independent of one another. This modularity is found everywhere in nature, from organs in the body to neurons in the brain, and even—as new research suggests—in the economies of the world.

In a study published earlier this week in the online physics journal arXiv.org, researchers Jiankui He and Michael W. Deem from Rice University investigated the modular structure of the global economy since 1969. Essentially the idea is that the economies of individual countries organize into groups, or modules, that trade with each other more than they trade with the countries of other modules (for example, the US, Mexico, and Canada are more closely tied to one another than, say, the US and Denmark). These groups organize into larger groups and so on. In this way, they create a hierarchical structure. Perhaps not surprisingly, He and Deem found that throughout the second half of the twentieth century, as globalization has increased, the size of modules in the economy have also increased, and thus the overall number of them has gone down. In short, there are fewer small multi-nation economic groups now than there were 40 years ago.

If you’re willing to apply the same principles of modularity in nature to the world economy, then the fact that the economy is getting less modular is somewhat alarming. If the researchers are correct, as the individual economies of the world become increasingly bound together, the global economy as a whole becomes less capable of adapting to changes. And the risk of recessions—like the one were in now—goes up. In nature, the reason there is a hierarchical structure to everything from cells to societies is that it allows for systems as a whole to evolve. It’s not a perfect analogy, but the point is, you’ve got to be careful who you hitch your wagon to.

Of course, there are some shocks even the most resilient systems won’t survive. For the economy, it might be climate change. For Wright’s Imperial Hotel, it was a wrecking ball in 1968.