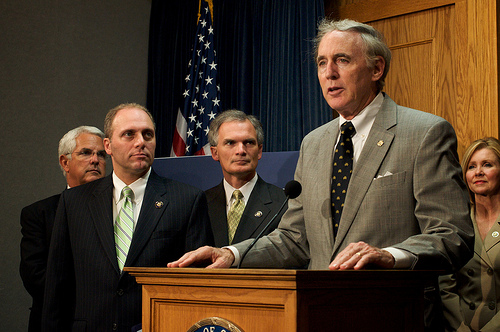 On my way to work each morning, I walk past the Capitol Hill Club, an exclusive Republican Party club in southeastern Washington. With its “Fire Pelosi” sign hanging above the entrance, the CHC looks exactly like where you’d expect Boehner and Co. to hang out: stately and posh—with quite delicious food, too. (Or so I’m told.) But is it swanky enough to charge $1,000 for a cup of coffee?

That’s what a fundraising invitation from Rep. Cliff Stearns (R-Fla.) seems to suggest. An invitation obtained by the Sunlight Foundation reveals that Stearns, a shoo-in for re-election in his Ocala, Florida, district, is offering donors 30 minutes of his time for “Coffee Talk” this Friday at the Capitol Hill Club Grill. A member of the energy and commerce and veterans’ affairs committees, Stearns’ handlers want $1,000 from political action committees in exchange for chatting with the Florida congressman over a cup of joe. (Individuals, I should add, only need to fork over $500 to clink mugs with Stearns.)

It’s not like Stearns needs the cash for his reelection bid. As of mid-October, he’d raised $621,000, spent $587,000 of that, and had $2.4 million in cash on hand. By comparison, his challenger, Steve Schonberg, a political novice running without a party affiliation, had raised nothing, spent $7,748, and had $3,001 inthe bank. Nate Silver at FiveThirtyEight projects there’s a 99.9 percent chance of Stearns winning.

More likely, Stearns’ coffee talk ties into his designs on the chairmanship of the energy and commerce committee should Republicans regain control of the House, which looks increasingly likely. Lately, Stearns has been buddying up with the GOP leadership—including presenting House minority (and likely House speaker) leader John Boehner with a $300,000 check last month—to make up for what Politico described as Stearns’ “past decisions to sit on a thick campaign war chest as his party was losing seats.” A GOP lobbyist in the same article quipped that Stearns had “a history of not always being in the team player category.” Beefing up his war chest with $1,000-a-pop coffee talk could help the Florida congressman make nice with GOP leadership just in time for the Republican Party’s imminent shellacking of the Democrats.

A press secretary in Stearns’ Washington, DC, office wouldn’t comment on the fundraiser. 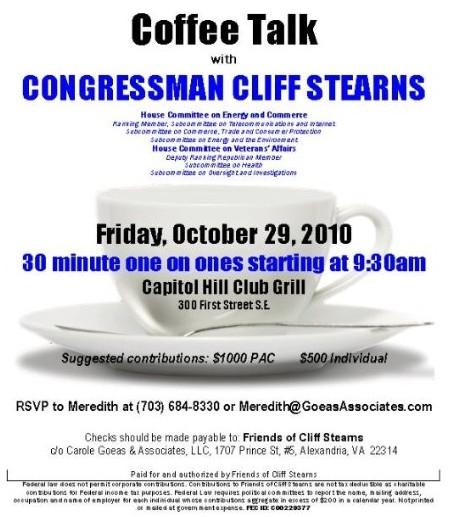