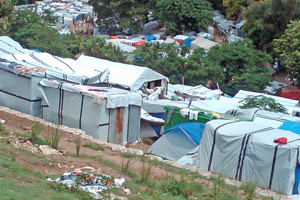 “I’m black and Haitian, and I wouldn’t go where you’re going right now, in the dark,” Marc, my ride, says as we’re on our way to the Petionville golf course on the eastern edge of Port-au-Prince. Well, it used to be a golf course. Now it’s packed with more than 50,000 homeless and is known as “Sean Penn’s camp,” because the actor’s humanitarian organization, JP/Haitian Relief Organization, runs it. Everyone knows the camps are hotbeds of rape and violent crime, but we’ve been planning all day for Marc to drop me off here to meet someone. His sudden worry about my getting out of the car is a little unsettling.

“I’m sayin’, there’s a reason all the aid organizations get their people outta there by like six,” Marc explains. (I’ve changed his name for his safety.) But when I resist blowing off the meeting, he allows that this settlement might be a little safer than others.

Daniel Julien, my new friend who lives here and invited me over, says the same assuring thing when I meet him on a busy side street and we start walking into the sea of tarps, lit by a few floodlights on impossibly high poles. I squint into the glare as Daniel leads me toward his house. “Did I call it a house? I’m sorry, should I say tent?” he says, and laughs. He leads me past row after row of plastic supported by sticks until we arrive at our destination. “And here we are,” he says. “My piece of Tent City.”

But “tent” isn’t really accurate, either. Daniel’s shelter, like the rest, is several sheets of sturdy plastic cobbled together. The “ceiling” is uneven, low, and leaky. It’s built on a steep dirt slope. Water comes in from all directions when it rains. And oh, how it rains: hard monsoon-season buckets pouring in through gaps in the roof and the sides, the earth floor catching it and liquefying, mud sliding downhill into the beds made on the ground. That’s the kind of water they’ve got too much of: the kind that keeps people standing all night so as not to wake up drowning. Daniel talks about the rain like a terror. A week later, he’ll call me to describe how a 10-minute rainstorm that killed at least five people in other camps destroyed his shelter and his things (below).

Daniel introduces Melissa, his 10-year-old daughter. “Est-ce que je peux te donner un bisou?” she asks barely audibly. I sense the outline of braids in her silhouette, but can’t be sure. “Bien sûr,” I tell her, she is welcome to give me a kiss, and I bend down to accept it, supersoft and tiny against my cheek. Daniel turns a bucket upside-down to offer me a seat. Everyone else gets on the floor, where he has laid down some ceramic tiles. There is just enough room for us four to sit; my shoulder touches Daniel’s fiancee’s; my feet touch his feet. Melissa lies across Daniel’s lap. 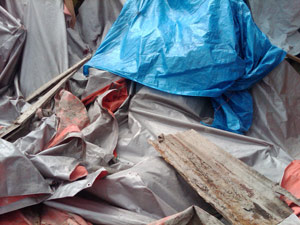 Inside Daniel’s place, as it exists for now, the only source of light is a flashlight aimed at the grey tarp overhead. The dim beam illuminates the USAID logo printed on it—which announces the gift as FROM THE AMERICAN PEOPLE—but little else. While I wait for my eyes to adjust to the darkness, a child materializes at my left thigh.

“Fortunately,” he says, “it’s not that hot in here right now.” I nod. All our arms are slick and our faces are running with sweat. But that hot means as hot as it is during the day, when being under the plastic is like being in an oven, when I become so woozy and oppressed that I find myself either forgetting or reluctant to suck more hot air into my lungs.

Daniel says that “Sean’s not here right now”—he’s off filming a movie—and talks about how the actor and American Army set up in this camp after the quake. He helped run errands for the soldiers. He helped deliver babies. He did whatever he could to aid the aiders. But the Army is gone, and Daniel’s friends who work in the camp say much of the rest of the aid organizations are leaving, too. (Update: Sean Penn has written me to emphasize that he and J/P Haitian Relief Organization are committed to their work in Haiti for the long term.) “Already, it’s been five months since we’ve gotten any food,” he says. But they do have water in the camp now; you can fill up buckets at pumps. It used to make him really sick, and sometimes the bleach taste is quite strong. Sometimes they still wake up with knots in their stomachs. There’s water that’s safer to drink, but that’s only for sale.

I am thirsty, but I hesitate to buy refreshments because Daniel doesn’t want me to use the communal toilets. It’s only eight o’clock, but it’s dark, and plenty of girls before me have been assaulted on that short trip. Also, “the toilets aren’t used properly, and you might get a disease you aren’t interested in catching,” Daniel says.

That’s why everything smells like urine. To avoid the toilets, Daniel’s family uses a bucket in a corner. The three of them keep their mud-floored plastic hovel fantastically neat, and empty the bucket constantly, but at some point I inhale sharply and breathe in too much of the stink. I puke into my mouth, and pretend I didn’t. I suggest that we go for a walk.

Outside, it’s clear that plenty of other residents are improvising bathroom facilities, too. The air is still, and within seconds my nose and throat are coated with the reek of hot rotting shit. “People have a lot of needs here,” Daniel tells me while I spit as inconspicuously as possible. He’s starting an organization called Redeem for Handicap. “There’s a lot of amputees because of the earthquake, right?” I ask, looking for my footing on the steep muddy trail. “How do they get around here?” “Yeah, that’s a problem,” says Daniel.

“The idea that this will turn around in your lifetime is a fantasy—and a crime of gargantuan proportions.”

But he points out that they’re hardly the only ones struggling. There’s a lady who lives right over here who lost her husband, Daniel gestures. She’s got kids, and she’s too sick to work, and she hasn’t eaten in a week. This tall smiley fellow shaking my hand is difficult to understand because he’s deaf from rubble that fell on his head. He needs a hearing aid. But Redeem for Handicap, or any other organization, can’t raise money from the international community without a website…

Suddenly, a skinny guy comes tearing up the path. What should he do? he’s asking Daniel, he’s asking some guy behind Daniel, he’s asking everyone nearby frantically. Some thugs are threatening his family because they want the space and piece of tarp his family occupies. The thugs say they will set it all on fire if he doesn’t move his family out. Is there anyone to talk to? Can he find a cop around here or what?

You can’t go anywhere in Port-au-Prince without seeing soldiers of MINUSTAH, the United Nations Stabilization Mission in Haiti. They do have a presence in some of these bigger camps—the French platoon kicking it at my hotel one night had spent their day breaking up a fight among refugees who cut open the side of a USAID tent to rob it, just as gangs of rapists slice through the side of a tent easy as pie and steal a woman. Haitians complain that the troops don’t do much to actually protect camp residents. We haven’t passed any police or soldiers or security on our long lap around the camp.

Daniel suggests to the panicked man where the blue helmets might be. The man goes running down the path in that direction. I wonder if he’s going to find them. If he does, I wonder how he’s going to tell them what’s going on; European, South American, and African MINUSTAH soldiers don’t speak Creole, and do not come with translators.

After a couple of hours of hanging out and wandering around, Daniel walks me back toward the edge of camp. From the sidelines, we can still hear the settlement buzz: people gathering in the wider paths, cooking hot dogs and selling water, people who ran long electrical cords to steal power to play that awful remake of “We Are the World” over the steady, chattery thrum. It’s not even 10 on a Friday night, but the noise is starting to die down, Daniel points out. People have to wake up early lest they roast to death in their plastic ovens once the sun rises.

“How long do you think you’re going to live here?” I ask.

“That’s a good question,” Daniel says. But not right away. First there’s a hesitation, where he fully stops, then catches his breath. It’s a horrible question, actually, under the circumstances. A friend of mine who delivered aid to Haiti in January emailed me when I got to the country. “Worst thing about being in Haiti for five days right after the quake,” he wrote, “wasn’t the dead bodies in the streets or the stench of the thousands buried in the rubble or even knowing that there were countless people alive under there doomed to a slow, horrible death because help was not on the way; it was knowing that the survivors—those in the tents and those without tents and those without homes and without food and water—those people would be without all of that forever. People forget that the day before the earthquake there were more NGOs operating in Haiti than any other country on the planet and it was still an unmitigated shithole and a horror. The idea that this will turn around in your lifetime is a fantasy—and a crime of gargantuan proportions.”

So how long does Daniel think he’s going to live here, in this camp? He needs a moment to collect himself before he puts on his brave smile. “That remains to be seen,” he says. That’s the sort of answer I get from everyone I ask. It’s sort of the only thing people can say when they still can’t fucking believe this is how they live now, but at the same time have begun to recognize that they’re going to live like this for a very, very long time.

[This post has been updated to reflect that it was the American Army, not American Marines, stationed in the camp after the quake.]