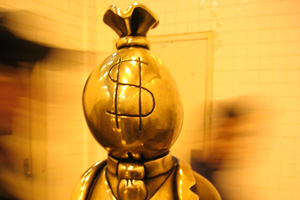 The real story of the 2010 midterm elections wasn’t the tea party, but instead the rise of deep-pocketed, secretive outside groups that spent nearly $300 million to influence last night’s (and this morning’s) results. These groups have anodyne names like American Crossroads or American Action Network or the Alliance for America’s Future, and more importantly, don’t have to disclose who’s pumping cash into their war chests. They’re mostly right-wing: conservative outside groups outspent lefty groups by a more than two-to-one margin, $187 million to $90 million, according to the Center for Responsive Politics. But not all of the outside groups are new to politics. The US Chamber of Commerce, which has been intervening in congressional races for years, was one of the biggest independent spenders in this year’s election, throwing tens of millions of dollars at races from California to New Hampshire.

So how much bang did these shadowy groups, some of which don’t have to disclose their donors until well after Election Day (if at all), get for their buck?

Below, we take a look at the five biggest outside spenders, as measured by the Center for Responsive Politics, and whether their top ten spending efforts—either in favor of or against a particular candidate—paid off at the ballot box on Tuesday. (Successful opposition or support is bolded in each table.)

So there you have it. The US Chamber of Commerce and the Karl Rove-launched Crossroads GPS led the way, with .800 and .700 averages, respectively, in making the most of their (mostly) attack dollars. The labor group SEIU, meanwhile, finished last, albeit in an incredibly GOP-friendly election year. (Unlike the Chamber or many other outside groups, unions such as the SEIU do have to disclose most of their donors.) Most of these groups’ funds, as you can tell, were focused on US Senate races around the country. And while the aforementioned conservative groups had plenty of success knocking off Democrats east of the Mississippi, their cash had far less influence out west, where Democratic incumbents Harry Reid, Michael Bennet, Barbara Boxer, and (probably) Patty Murray swatted away their challengers to eke out narrow wins on Election Day.