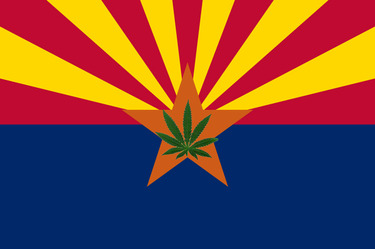 On Sunday, Arizona officially became the 15th state to legalize medical marijuana. It was the narrowest of victories: By the time that all of Arizona’s of 1.67 million votes were counted, Proposition 203 won by less than 5,000.  But while that was hardly a resounding win for the pot initiative, it’s an important one in a state in which a plurality of voters and all victors for statewide office this year are Republicans.

As I’ve noted in the past, loosening restrictions on marijuana turns out to be a bipartisan issue. According to a recent poll by the Pew Research Center, a whopping 61 percent of Republicans support legalizing the drug for medical patients. The tea party includes vocal advocates of legalizing pot for medical as well as recreational use such as US Rep. Ron Paul (R-TX) and the former Republican governor of New Mexico, Gary Johnson.

Of course, marijuana legalization in any form is still a tough sell in many states. On election day, voters rejected a similar medical marijuana measure in South Dakota, and other states haven’t even been able to get the issue on the ballot.  The difference in Arizona’s case is probably geographical: According to a poll released on April 20th by CBS news, 55 percent of voters in Western states support legalizing marijuana for recreational use—a higher percent than in any other part of the country (only 36 percent of Midwestern voters support legalization). Western Republicans tend to be more libertarian than their counterparts in the rest of the country.

Ironically, some Arizona voters may have been scared into into opposing medical marijuana by the spectacle of California, where a landmark initiative to legalize pot for recreational use was on the ballot. California potheads argued that the state’s 1996 medical marijuana law is so loosely worded that pot is virtually legal already. Working the argument from the other side, Keep AZ Drug Free, the anti-Prop 203 group, claimed that allowing medical cannabis in the Grand Canyon State would just be the first step towards total marijuana legalization. In an effort to tamp down such fears, Prop 203 places tighter controls on who can use medical marijuana and where they can buy it. Yet if polling trends hold up, it’s just a matter of time before the West completely succumbs to reefer madness.