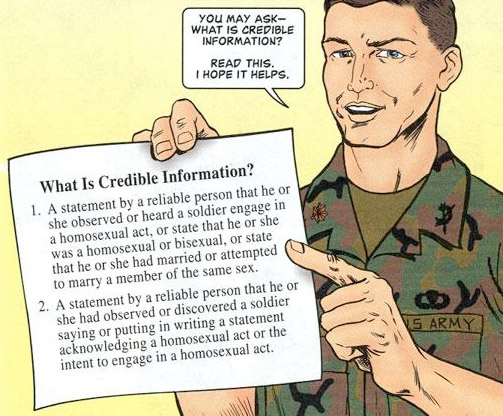 As Congress prepares—again—to debate Don’t Ask, Don’t Tell, Mother Jones has unearthed data showing the Army in recent years has been tougher on purging gays from the ranks than soldiers who are physically unfit for duty.

Earlier today, Defense Secretary Robert Gates released a military study showing that repeal of the services’ ban on gays wouldn’t adversely affect force readiness. But the Army’s recent discharge statistics (.xls), given to MoJo by a government source, suggest that the service has been far more concerned about its soldiers’ sexual orientation than their waistlines, muscular endurance, or cardiovascular ability. In fiscal 2007 and 2008, the Army brass threw out 592 enlisted members for violating DADT—more soldiers than it ejected for excessive body fat or fitness-test failures combined. (See info box below.)

Those were lean recruiting years for the Army, with wartime manpower requirements at an all-time high. The service’s response was to ease its fitness standards and make it harder for commanders to discharge overweight or underperforming soldiers. “In ’08-09 it was so bad that I had a warrant officer who demanded we get him XXXL flight uniforms,” one active Army officer tells Mother Jones. “He couldn’t wear the new [camouflage] pattern ones because they didn’t make them for a guy who was 313 lbs.” The officer added, “Some people really are too big to fail, I guess.”

But the Army didn’t appear interested in extending gays and lesbians the same latitude. While fitness-related discharges routinely outnumbered homosexuality discharges by 18 to 1 in the early ’90s, the numbers are far closer today. Yet separations of LGBT soldiers have remained relatively steady around 300 a year—until this year, when Gates began to ease enforcement of the DADT rule. In fact, except for one year (fiscal 2004), gay discharges have always outnumbered discharges for soldiers who fail the Army’s physical fitness test—a two-mile run, pushups, and sit-ups.

Under Gates’ leadership, the military now appears eager to allow gays to serve openly, inviting a new core of recruits into the ranks. “The findings suggest that for large segments of the military, repeal of Don’t Ask, Don’t Tell, though potentially disruptive in the short term, would not be the wrenching, traumatic change that many have feared and predicted,” he told reporters today.

Yet opponents of the DADT repeal continue to insist that allowing homosexuals to serve will harm defense readiness and unit cohesion. “If military bases and military schools become focal points for advancement of the gay agenda, we can expect serious repercussions among the families of the volunteers who make up our armed forces,” the Family Research Council’s Tony Perkins wrote in an op-ed Monday.

His editorial never addressed the advancement of a fat agenda in the military.

For a complete Excel spreadsheet of Army discharge data from FY 1983 to today, click here.