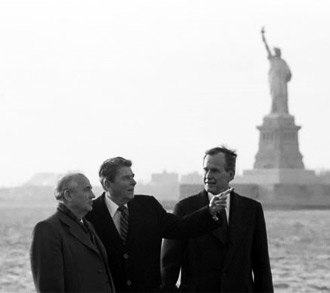 On the afternoon of October 11, 1986 in Reykjavik, Iceland, nuclear weapons negotiations between Ronald Reagan and Soviet president Mikhail Gorbachev over the Strategic Arms Reduction Treaty (START) reached an impasse. Reagan insisted on being able to develop and test SDI, his space-based missile defense system commonly referred to as Star Wars. But Gorbachev refused to give in. He couldn’t return to Moscow saying he agreed to let the Americans pursue such a weapons project. Reagan countered that SDI was strictly for defense and that the US would share its technology with the Soviets. At this point, as Reagan adviser Jack Matlock recalled to historian Richard Rhodes, Gorbachev “exploded”:

“‘Excuse me Mr. President,” he said, “but I cannot take your idea of sharing SDI seriously. You are not willing to share with us oil well equipment, digitally guided machine tools, or even milking machines. Sharing SDI would provoke a second American revolution! Let’s be realistic and pragmatic.”

As it turns out, Star Wars was anything but realistic. The $44 billion project was effectively abandoned in the 90s with its feasibility never firmly established. Russia probably assumed that if the US had Reykjavik to do over again, it would jump on the chance to push a treaty through. But as the current debate drags on in Washington over ratification of New START—a treaty that would reduce Russian and US deployed strategic warheads by 30 percent—the situation is beginning feel eerily similar to Reykjavik.

Since April, when Obama met with Russian president Dimitri Medvedev and signed New START, he has been battling against Republicans led by Arizona senator Jon Kyl to get the treaty ratified, spending billions to upgrade the current US nuclear program.

One of the latest efforts to appease Republicans is a 10-page list of “declarations” (PDF) issued by the Senate to tell Russia how the US plans to interpret the treaty. As Ron Rosenbaum points out in Slate this week, in “Section A, Paragraph 5, Subsection B [of the document] the US denies any obligation to tell the Russians about ‘any satellite launches, missile defense sensor targets and missile defense intercept targets, the launch of which uses the first stage of an existing type of United States [missile].'” Upon reading this, the Russian equivalent of the Senate foreign affairs committee withdrew it’s support of the treaty. According to Rosenbaum, Russia has declared it will back out of New START if it feels the US is “using its language to mask a [ballistic missile defense] program.” In short, getting the treaty ratified in the US might end up killing it in Russia—and for essentially the same reason the first START treaty was killed decades ago. It’s hard to imagine this detail is lost on Republicans.

As Obama pointed out in a press conference this week, every president since Reagan has been able to get some sort of arms-reduction treaty though Congress, usually with widespread bipartisan report. It’s no surprise the Russians are wondering what is going on in Washington right now. Are Republicans actually going to kill the New START treaty to spite Obama? (As military affairs analyst Alexander Goltz put it in the Washington Post, “if START is not ratified, the [2009] Nobel Peace Prize would look very funny indeed.”)

Toward the end of their last day in Reykjavik, Gorbachev and Reagan realized they weren’t going to come to the historic arms-reduction agreement they had both been hoping for:

Reagan: This is a very strange situation. You want a ten-year period. I won’t give up SDI. But both of us insist that the most important issue is eliminating our nuclear arsenals.

Gorbachev: Equality is essential at every stage…If one of us won and the other lost, that would come out at the next stage and the loser would leave everything in a ruin.