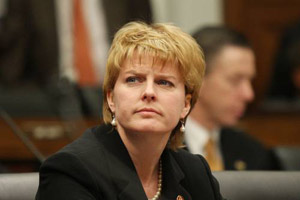 Will President Barack Obama appoint Wall Street-friendly Rep. Melissa Bean (D-Ill.) to head the new Consumer Financial Protection Bureau? If so, that would be bad news for reformers, who are appalled by the prospect—but good news for John Michael Gonzalez, a leading lobbyist for Big Finance. Before becoming one of Washington’s top influence peddlers on behalf of financial firms and trade groups, he was Bean’s chief of staff.

According to Politico, Bean, a congresswoman representing northern Illinois who trails in the vote-counting in her close reelection race against Republican Joe Walsh, is under consideration by the White House for this new position, heading up the agency that consumer finance advocate Elizabeth Warren is now constructing.

Bean’s campaign would neither confirm or deny whether she’s under consideration for the CFBP job. “This race remains too close to call, and we are staying focused as this election process continues,” says Bean spokeswoman Gabby Adler.

Bean, a member of the House financial services and small business committees, has a long history as a favorite of Wall Street. Her top donors hail from the finance, insurance, and real estate industries, which together have poured $2.5 million into her campaign coffers over her five-year career, according to the Center for Responsive Politics. In the 2008 elections, Bean bagged more money from the Chamber of Commerce, which vehemently opposed the Dodd-Frank bill, than any other House incumbent. And among the top contributors to her 2010 reelection campaign were JPMorgan Chase, Goldman Sachs, and Allstate Insurance, all of which sought to weaken aspects of the Dodd-Frank financial reform bill that established the Consumer Financial Protection Bureau.

“The White House needs to beat back the Bean idea, otherwise they’ll look like fools,” says one Democratic strategist. “This is the craziest thing I’ve ever seen. She’s a tool of the financial industries.”

Bean ultimately voted for the Dodd-Frank financial reform bill, but she tried to water down a crucial piece of the bill involving consumer protection laws. The bill initially gave state financial regulators the power to write tougher consumer protection statutes than those at the federal level. Bean, though, offered a provision backed by big banks and the Chamber of Commerce that would’ve exempted national banks from those tougher state laws, in effect neutering the states’ new oversight powers. Bean was also one of six Democrats to oppose taxing bonuses at government-owned AIG, and she opposed auditing the Federal Reserve. “We’re very connected to the business community and very much appreciate the importance of their success to our overall economic recovery,” Bean said in March 2009. “We are trying to champion their issues and concerns.”

And there’s one more matter to anger reform advocates and liberal bloggers: her close connection to Gonzalez. From 2005 until last year, he was Bean’s chief of staff. He flew through the revolving door and is now a lobbyist at Peck, Madigan, Jones, and Stewart, a major Washington lobbying firm. There, he’s lobbied for such heavyweights as the Business Roundtable, a financial services trade association; Deutsche Bank; Mastercard; the International Swaps and Derivatives Association; and the Chamber of Commerce. For the Chamber, Gonzalez’s firm worked to exempt national banks from tougher state consumer protection laws—the same issue Bean championed. Reform advocates would certainly not fancy Gonzalez helping Bean run the CFPB—or having the ear of its first chief.

According to federal lobbying records, Gonzalez has been registered to lobby House and Senate lawmakers on most major financial reform efforts of the past year that have been opposed by Big Finance: increasing regulation of the $600 trillion over-the-counter derivatives market; beefing up shareholder control of executive compensation; creating the new consumer protection agency; and preventing banks from becoming too big to fail. The companies and associations he’s represented are hardly pro-reform types. All of Gonzalez’s financial clients sought to water down, if not outright defeat, the Dodd-Frank financial reform bill and other consumer-friendly legislation.

Gonzalez’s bio at the website for Peck, Madigan, Jones, and Stewart depicts him as a keen Democratic operative. In 2006, it notes, he “successfully planned and executed a winning reelection strategy, raising $4.3 million and earning the most support for any incumbent from the US Chamber of Commerce.” This led the House leadership to tap him to work on its incumbent protection program. In 2007, he helped Bean coordinate a superdelegate operation in the House for the Obama campaign. National Journal cited him as a favorite of Rahm Emanuel, and he helped pass the TARP bailout in late 2008.

According to ProPublica, Gonzalez was the moderate Democrats’ go-to guy when the financial sector was collapsing in 2008:

Three days after Lehman Brothers collapsed in September 2008, the New Democrats [coalition in the House] unveiled a financial-reform working group co-chaired by Melissa Bean. The group was piloted by John Michael Gonzalez, Bean’s chief of staff, who left four months later to lobby for several banks and financial-services trade groups.

Recently, Gonzalez—referring to lobbyists who work on campaign staffs—told Roll Call: “Nobody wants the Brooks Brothers Brigade out there campaigning for you.” The question for the Obama White House is whether they want to put in charge of consumer financial protection a politician who has accepted large amounts of money from this brigade—and whose former chief of staff lobbies on the brigade’s behalf.