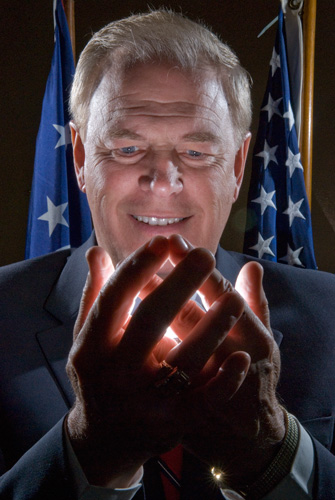 Forget the Senate and House. That’s short-term thinking. The real prize in Tuesday’s midterm elections is the power to draw congressional seats and determine the country’s balance of power for the next decade.

If either party can achieve what politicos call the “trifecta”—control of the governorship and both chambers of the state legislature—in a given state, it will be able to draw congressional districts within that state unencumbered by any need to compromise with the other party. That’s the kind of power that creates electoral maps like the one former GOP Majority Leader Tom Delay helped bring to Texas in 2003—a map that pushed four of the state’s Democrats out of their seats.

Five states bordering the Great Lakes—Indiana, Michigan, Ohio, Pennsylvania, and Wisconsin—are the central battleground in the fight to control redistricting. Sure, the Republicans might take back the House of Representatives on election night. But winning gubernatorial and state legislative races in these five states could allow the GOP to dominate the House for much longer than the next few years.

That’s a prospect that has national Democrats very worried. Carolyn Fiddler, a spokeswoman for the Democratic Legislative Campaign Committee, which aids Dems in state legislative races, says that she’s seen maps that corral all of the Democrats in Ohio into just four districts—down from ten current Democratic-leaning districts. (Ohio is also set to lose two representatives in post-Census population adjustments.) GOP redistricters in Pennsylvania could easily cut that state’s Dem delegation in half, Fiddler adds. That would mark a dramatic change from the current balance of 12 Dems to seven Republicans. (Pennsylvania is also likely to lose a seat.)

The possibilities for Democrats in Indiana, Wisconsin, and Michigan look just as bad. Here’s a quick breakdown:

Who Drew the Map Last Time?: Republicans had the trifecta and drew the current map.

What to Watch for on Tuesday: Republican Rick Snyder is an overwhelming favorite to win the governor’s race. (The New York Times‘ polling guru, Nate Silver, gives him a 99 percent chance of winning.) Winning the Michigan House will be a heavy lift for Republicans. But with unemployment in the state at 12.9 percent, anything’s possible.

Who Drew the Map Last Time?: The bipartisan-drawn Indiana map is widely considered one of the most competitive in the country.

What to Watch For on Tuesday: The Democrats now hold the Indiana House by a four-seat margin.* The state’s Republican governor is not up for reelection. If the Dems lose the Indiana House*, you can probably say goodbye to the kind of competitive seats like Indiana’s “bloody” eighth and ninth.

Parties Control One House Each

Who Drew the Map Last Time?: Like Michigan’s, Ohio’s current map was drawn by a Republican trifecta. After fighting uphill for a decade to get back into power, the Dems are going to be very disappointed if they face another trifecta in 2010.

What to Watch For on Tuesday: Governor Ted Strickland’s reelection race is a bellwether for the fate of Dems nationwide. He faces a flawed GOP opponent in former congressman and Lehman Brothers banker John Kasich. Strickland’s approval ratings are negative, but not as bad as other incumbent Democratic governors. His poll numbers vs. Kasich have been recovering lately. But unemployment in Ohio is around 10 percent. And the Times‘ Silver gives Strickland just a 19 percent chance of holding onto his job. If the Democrats lose that race and their seven-seat margin in the state house, the GOP will be able to draw yet another very red congressional map—and consolidate their gains from this year.

Pennsylvania (Set to Lose One Seat)

Who Drew the Map Last Time?: This is the third of the five states with a map drawn by a GOP trifecta.

What to Watch For on Tuesday: Silver gives Democratic gubernatorial candidate Dan Onorato just a 2 percent chance of winning. The Republicans only need to win three seats to take control of the state house. Any vulnerable Democrats who survive this year are probably going to lose their districts next cycle—and this in a state that’s voted for the Democratic presidential candidate in every election since 1992.

Who Drew the Map Last Time?: This was a bipartisan map, drawn by a Democratic Senate and a Republican House, and approved by a GOP governor.

What To Watch For on Tuesday: Of the five, this is probably the state where the Dems have the best chance of avoiding a Republican trifecta. GOPer Scott Walker is a 20-to-1 favorite to beat Milwaukee Mayor Tom Barrett in the governor’s race. But Dems have a six-seat margin in the House and a three-seat lead in the Senate. They think their House majority is probably safe. Then again….

*I corrected these sentences. They originally referred to the Indiana Senate and a one-seat margin. That was wrong. Sorry.